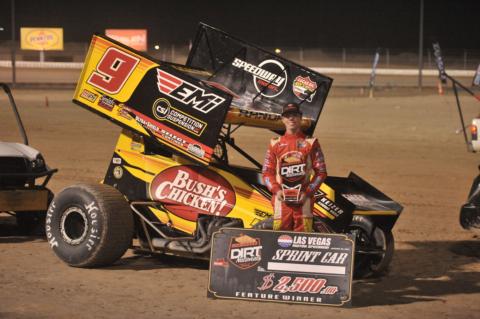 LAS VEGAS (January 20, 2022) — Chase Randall used patience, talent and a fast car to maneuver his way to the front and win the Bandits Outlaw Sprint Series feature during Night 1 at the inaugural Las Vegas Dirt Nationals.

Randall, a young racer from Waco, Texas, started third and methodically tracked down leader Garet Williamson. With nine laps to go, Randall threw a slide job into Turn 1 to grab the lead. Williamson would re-pass Randall off Turn 2, but another slider from Randall would seal the deal coming off Turn 4. Randall drove away from challengers Garen Linder, Jeremy McCune, Wes Wofford and Mindy McCune as they filled out the Top 5. Williamson blew a right rear tire with five laps to go, relegating him to a ninth-place effort.

“It was just tire management,” Randall said. “The track surface was really good. I kinda made sure I was in the good dirt and made sure my right rear lasted until the very end. You gotta know how hard to push it.”

In Open Modifieds, Rodney Sanders started on pole and led wire-to-wire in the $2,500-to-win feature. Sanders (Happy, Texas) battled briefly with DJ Shannon on Lap 1, but pulled away before a caution brought the field back together with nine laps remaining. Sanders, in his No. 20 Open Mod, nailed the restart and was gone. Brian Ruhlman, Kollin Hibdon, Lance Mari and Ricky Alvarado put on a show for positions 2 through 5 and finished in that order.

“The car’s been really good since we unloaded,” Sanders said. “The thing’s really fun to drive right now. Let’s see how it goes the rest of the week.”

The Open Modified class is a multi-rule set class this week, with drivers using USMTS/USRA, UMP or WISSOTA rules packages. Sanders is running under USRA rules.

In the $500-to-win Hobby Stock feature, Luke Ramsey (Bedford, Iowa) launched from his outside-pole starting position, took the lead down the backstretch and never looked back. Ramsey piloted his No. 17 steadily away from second-place John Watson. Ramsey finished 2.445 seconds ahead of Watson in a caution-free race.

Dalton Hatten held off a furious charge from Ridge Abbott to claim the $500-to-win Dwarf Car feature. Hatten (Craig, Colo.) drove his No. 63D from ninth to first in four laps and took the lead with a three-wide pass below Abbott and John Foster. After a late caution, Abbott and Foster battled behind Hatten. After Abbott prevailed, he tracked down Hatten over the final three laps but couldn’t quite get past him.

Nick Velasquez, Tommy Velasquez III and David Teves filled out the rest of the Top 5.

Scott Beaudoin won a caution-filled West Coast Sport Compact feature that began with a barrel roll. Beaudoin (Coos Bay, Ore.) grabbed the lead at the break from his fourth-place starting position. As the field came to complete lap 1, Austin Sprague tumbled down the front stretch. He climbed out unscathed. Beaudoin would nail three more restarts and pulled away for the win and $500 payday.

Friday and Saturday at the Las Vegas Dirt Nationals will feature nearly identical shows to Thursday night, with all five classes again competing. Both nights will be separate races with heat races and features.

Ticket and race information for the Las Vegas Dirt Nationals can be found at www.lasvegasdirttrack.com.