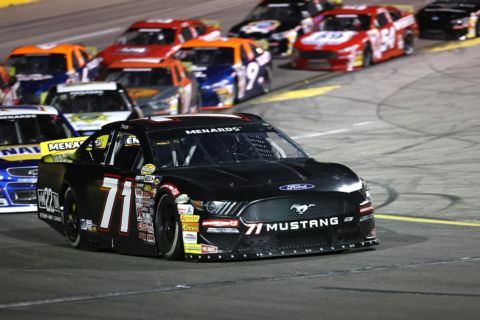 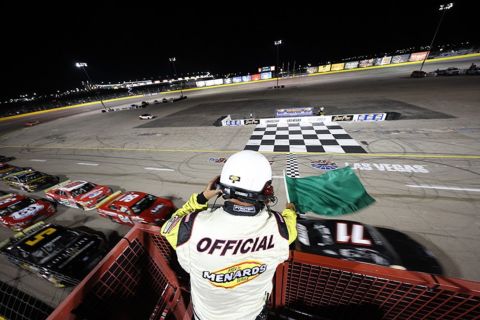 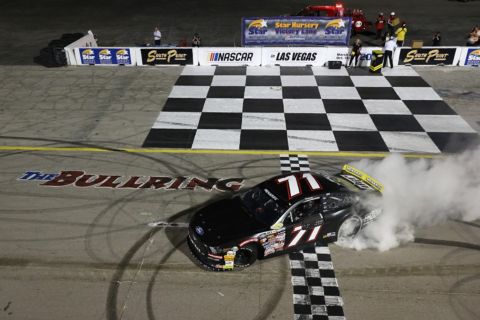 Young Taylor Gray made victory lane two years in a row in Friday’s Star Nursery 150 ARCA Menards Series West feature at the Bullring at the Las Vegas Motor Speedway with a dominant performance in his No. 71 David Gilliland Racing stock car at the fast 3/8-mile paved oval as part of the South Point 400 weekend at the Speedway.

The busiest night of the year at the Bullring also saw Round 10 of the Star Nursery Championship for the local competitors as series champions were crowned in some very exciting wheel-to-wheel action that highlighted the entire 2022 campaign.

In the penultimate round of the ARCA Menards Series West tour, Gray, the 17-year-old from Mooresville, NC, let the competition know he was the driver to beat with an impressive qualifying run (only driver in the 14-second bracket) to secure the pole position over 17-year-old Andre Perez de Lara and 16-year-old Landen Lewis.

For Gray, the start and restarts were his obstacles throughout a night in which he led all 150 laps enroute to his fifth ARCA Menards Series victory in 2022. It was his second West Series win after scoring the season opener at Phoenix International Raceway.

Gray fought off challenges from Lewis and Perez de Lara later in the event, but he was never headed after a lap or two of each restart. With Gray, a third-generation racer, opening the margins during his stints, the racing for second through fifth was side-by-side and bumper-to-bumper action.

“Landen (Lewis) gave me a little bit of a hard time on those restarts,” said Gray, whose father, Shane, and grandfather, Johnny, were stars at the Strip at LVMS in the NHRA national drag racing events in the past decades. “All props to my who work so hard at the shop. They work their butts off every week so we can come out and do things like this. It was a good race and a good day.”

It was a sensational night for David Gilliland Racing with Gray and Perez de Lara placing 1-2 with the ARCA Menards Series West finale set for the Phoenix one-mile oval on Nov. 4.

The action was hectic following the Star Nursery 150 Friday night at the Bullring with championships on the line in the seven local divisions final races and the Late Model Truck Series.

Bullring legends Justin Johnson and Dustin Ash continued their winning ways with impressive wins which add to their overall victory totals as they battle for the winningest Bullring driver ever.

Johnson, winner of nine Super Stock features in 2022, continued his domination in the Al Budd-owned No. 17 in the 25-lap Super Stock main with a 2.917-second triumph over Jason Kiser, Sam Jacks, Mike McKearn and Bill Paddock Jr. The nine races easily propelled Johnson to the Super Stock point title and a check with Craig Keough of Star Nursery.

The Las Vegas racer then returned to capture the 30-lap NASCAR Power Grade Inc. 602 Modifieds event in a brilliant battle with multi-time track champion Doug Hamm as he drove the No. 17 machine to a 0.968-second victory. Third went to San Jacks followed by Kyle Jacks and Brian Williams.

“It was a great night for our team with two wins and two championships to wrap up the season,” said Johnson, who won 13 Bullring main events in 2022 between Super Stock and Modified features. “I knew Doug was right on me in the Modifieds and I couldn’t make a mistake. He is a legend at this place and it’s great anytime I can beat him. Our crew has worked hard all season and it’s awesome to get two titles for our family, friends and fans here at the Bullring.”

For Ash, racing on a limited Bullring schedule this year, the race car builder collected his seventh Sigma Performance Services Pro Late Model victory of the year in his No. 11 SPS stock car with a 3.278-second win over veteran Chris Clyne, youngster Amileo Thomson, Jaron Giannini and Keller.

Ash started eighth and took the lead on lap 22 of the 40 circuits Friday night as he battled Thomson, the early leader, for several laps before taking the advantage in turn three. Ash admitted his team has been improving his mount recently and unofficially broke the qualifying track record in Pro Late Model practice early in the day.

“Our crew has worked hard to get the car faster with each race and the car was great tonight,” said Ash. “Amileo was fast early in the race, and I see young guys like him and Enzo (Lalama) coming from the Legends cars and showing a lot of potential. It’s good for the class. We will continue to work hard now to get ready for the Open Comp race here in December.”

Veteran Scott Gafforini scored another Pro Late Model point championship Friday with an eighth- place finish in his No. 38 Gene Woods Racing Experience car. Gafforini admitted his team is building a new car for 2023 and will retire the current one which dates back to 2000 when he won the main event at the Bullring.

Speaking of the wild M&H Building Specialists/JBM Underground USLCI Legend Cars 25-lap competition, the championship came down to the final race as Cody Brown led Jordan Holloway by just two points. As in the past few events, the field saw drivers from many different states including Arizona, Washington, Texas, Colorado, North Carolina, Oregon and California as they prepared for the USLCI Nationals set for the Bullring on Nev. 3-5.

Holloway fought his way from eighth on the starting grid and grabbed the lead on lap 12 in turn four over youngster Jake Bohlman of Huntington Beach, CA, but Bohlman and Brown kept the pressure on Holloway as he was seeking his seventh Legend Car win of the season at the Bullring.

With three laps remaining, the college student from Henderson pulled out his margin to a 1.245-second victory and clinched the Legends point title over Brown. Bohlman took the runner-up spot followed by Brown, Ricky Gutierrez, Scott Anderson, Branden Giannini and Nathan Quella.

“It’s been a great season and I knew I had to get to the front quickly with Jake, Cody and others charging up there,” said Holloway. “The car has been fast this year and the crew is making it quicker with each race. Now, we can concentrate on the Legends National next month. But I’ll take the win and the championship tonight. Thanks to my family and all of our sponsors for a great year.”

In the 35-lap Late Model Truck Series, veterans Lee Keach and Mark Allison put on a dazzling show with nose-to-tail action through the event before Keach scored his second Bullring feature win of the 2022. Keach drove his No. 03 past Allison’s No. 3 at the checkered flag by 0.844 seconds. The second-place finish gave Allison the Truck Series point championship this year.

Jacob Quartaro recorded his second NASCAR Nostalgia Street Rods Outlaw Factory Stocks main event within a week with another dominating performance in his No. 44 car. Quartaro defeated Kyle Jacks by 5.694 seconds with Sheri Goldstrom, who received the Bullring Sportsman of the Year Award prior to Friday’s race, third followed by Rob Pfaffy and Dylan Reinke. A solid, consistent run by Michael Miller gave the Las Vegas driver his second consecutive Bullring title in his fast No. 21 machine.

Newcomer Reagan Fruge of Colorado made an exciting late-lap pass for the victory in the 12-lap M&H Building Specialists/JBM Underground USLCI Bandolero finale, as he took a 0.107-second win over Ryan Schank at the checkered flag. Third went to Tanner Ash followed by Tuscan Nuccitell and Siena Nuccitelli. Logan Gresser’s seventh place finish Friday night secure him the Bandolero Bullring season championship with his No. 45 car.

The always-entertaining Skid Plate category had the crowd roaring again Friday, but the winner was still young R.J. Smotherman of Pahrump, NV, in his red No. 24. It was the ninth win of the 2022 season for Smotherman, who claimed his car was for sale in victory lane after the race.

Starting from turn two on the 3/8-mile oval, R.J. grabbed the lead after a red flag halted action due to Racer X stalled car. Smotherman easily took the win over 2021 champion Ben Williams, Robert Leany, Don Leonard and Dylin Smotherman. With nine victories to his credit, R.J. was the dominant champion this year and received a nice cash from Keough in winner’s circle.

NEXT RACE: The annual USLCI U.S. Legend Car Nationals will be the next exciting event at the Bullring set for three nights of highly competitive wheel-to-wheel action on Nov. 3-5 with some of the brightest and most talented young drivers in the country. The field will include local Las Vegas racers taking on drivers from some 25 states. There are no public tickets for sale for this event.