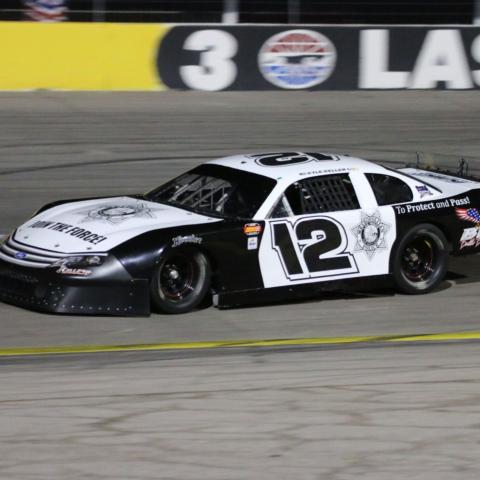 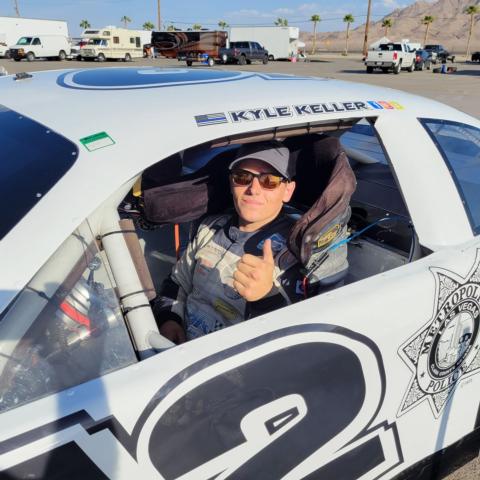 The evening opened with a spectacular parade of Las Vegas area First Responders coming from the famed Las Vegas Strip into the Las Vegas Motor Speedway’s Bullring with lights flashing and sirens sounding to salute for the big crowd on hand before a beautiful sunset.

In addition, the Las Vegas Metro Honor Guard made a sterling presentation next to Keller’s No. 12 stock car to open the racing festivities with the National Anthem, God Bless America and Invocation.

Keller, the 17-year-old rising pavement star, started from the front row in the 60-lap Sigma Performance Services Pro Late Model main event and held off challenges of veteran Chris Clyne and another teenager Sean Hingorani to score his second 2022 Bullring Pro Late Model feature after his win over Hingorani in February.

Keller, who just missed quick time in qualifications by 0.004 seconds to Clyne, held off Clyne’s advances for some 50 laps in a great dual before Hingorani slid by the veteran racer for second on lap 56. At the checkered flag, it was Keller in the LVMPD Recruiting machine by 1.001 seconds over the California teenager in the No. 13 Sigma Performance Services car with Clyne settling for third in his No. 14 Star Nursery mount. Taking fourth and fifth were Wisconsin’s John Holtger and local favorite Scott Gafforini.

“It was a great race for us tonight on a special evening saluting our First Responders and Hometown Heroes with the LVMPD Recruiting car,” said Keller. “They are the ones who keep our country safe and let us do what we get to do here. And thanks to Battle Born Racing for what they do for our Kyle Keller Racing team. It feels great to racing in front of a big crowd here tonight. Thanks to my parents and our crew for giving me a strong machine tonight.”

In the always-popular and highly-competitive M&H Building Specialists/JBM Underground USLCI Legends cars, there were a number of contenders who started at the front of the field in the 30-lap main event Saturday with 2022 Bullring feature winners Jordan Holloway and Cody Brown on the front row.

And the racing didn’t disappoint the big crowd with two and three-abreast battles through the 30 circuits with Holloway holding off a charging Brown at the checkered flag with a close 0.398-second victory in his No. 12J machine. Brown, another local teenager competitor with a bright future, had to settle for the runner-up spot after hounding Jordan throughout the event. Rounding out the podium in the Legends was Hingorini followed by Enzo Lalama, Amileo Thomson, Bruce Silver and Brendan Tracy.

“This is my favorite track, and I knew Cody was going to put pressure on me throughout the race,” said Holloway, who plans to race this coming week in Nashville during his Easter vacation from school. “Cody has become a very good driver and it’s fun to race wheel-to-wheel with him. I’ll jump on a flight Monday to Nashville, and I hope to continue the momentum this week at those races.”

The busiest competitor of the First Responders Night at the Bullring was the local veteran and many-time feature winner Justin Johnson, who drove in two 25-lap NASCAR Super Stock features and the 30-lap NASCAR Power Grade Inc. Modified main event. Johnson has been closing in on the all-time Bullring feature win list with numerous victories already here in 2022.

In the Modified finale, Johnson grabbed the lead from pole sitter Kayli Barker and consistently stretched his margin over runner-up Sam Jacks to take the checkered flag by 2.985 seconds with Barker scoring third followed by Kyle Jacks, Brian Williams and Court Connell.

“Thanks for the First Responders who give us so much and thanks to the fans here tonight,” said Johnson, who carries the No. 17 in all of his entries this year. “Al Budd gives me a great car to drive in the Modifieds. It feels like a go-kart sometimes here. It was a busy night with two Super Stock main events and the Modified feature. But winning is always great too.”

Johnson came back in the second 25-lap Super Stock final to edge out Sam Jacks by 0.358 seconds with third to Rob Pfaffly as Don Geary and Gary Griffiths rounded out the top five. In the evening opener, Jacks and Johnson put on a tremendous battle right to the checkered flag with Jacks driving his No. 4 car to the 25-lap win by 0.034 seconds over Johnson. Third went to David Quartaro followed by Mike McKearn and Geary.

Saturday night also saw the return of the Late Model Truck Series and host of veteran racers battled it out with nose-to-tail action throughout the 35-lapper. At the checkered flag, local racer Lee Keach returned to the Bullring winner’s circle in an exciting 1-2-3 competition with another Bullring star Mark Allison of Las Vegas and Michael Egurola of Tucson, AZ. Completing the top-five in the truck event were Bill Black and Gary Wyatt.

“I think we put on a great show today with those bumper-to-bumper battles,” said Keach. “It’s always fun racing against Mark like that tonight. Thanks to our truck guys for another good event and to the fans for their support tonight. Thanks to the First Responders too. A great opening parade tonight too.”

In the Junior Late Models with ages from 10 to 16, teenage female Kylie Ith of Salt Lake City, UT scored her second consecutive Bullring feature Saturday in her No. 19 car over California’s Monty Tipton and Caden Cordova. Fourth and fifth were Ashton Leonard and Cameron Carraway.

Jacks jumped to the lead on lap four and never looked back in beating defending class champion Michael Miller and polesitter Sheri Goldstrom.

Another local teenager R.J. Smotherman of Pahrump, NV, continued his domination of the always-entertaining 15-lap Skid Plate finale with another win in his No. 24 machine with 4.870-second victory over 2021 Bullring champion Ben Williams. Third went to North Las Vegas policewoman Berenice Hernandez with Dylin Smotherman and Christina Harper completing the top five. As usual, the unknown Racer X competed in the race but was disqualified after the checkered flag.

NEXT RACE: Round No. 5 in the Star Nursery Championship Series at the Bullring at Las Vegas Motor Speedway will be Saturday night, April 30, at 7 p.m. with the “Military and Veterans Appreciation Night.” The popular racing divisions will be back at 3/8-mile oval including the fast NASCAR Power Grade Inc. Modifieds, NASCAR Sigma Performance Series Pro Late Models, Junior Late Models, USLCI Legends Cars, NASCAR Super Stocks, NASCAR Outlaw Factory Stocks, USLCI Bandoleros and the fan favorites, Skid Plate Cars. Gates will open at 5 p.m. with opening ceremonies taking place at 6:45 p.m. Tickets are $8 for adults. Children 12 and under will be admitted free with a ticketed adult through the 2022 Bullring season. Tickets may be purchased in advance by visiting or calling the LVMS ticket office at 800-644-4444 or online at LVMS.com. For stockyard passes please call 800-644-4444, Monday-Friday, 9 a.m.-5 p.m. PST.