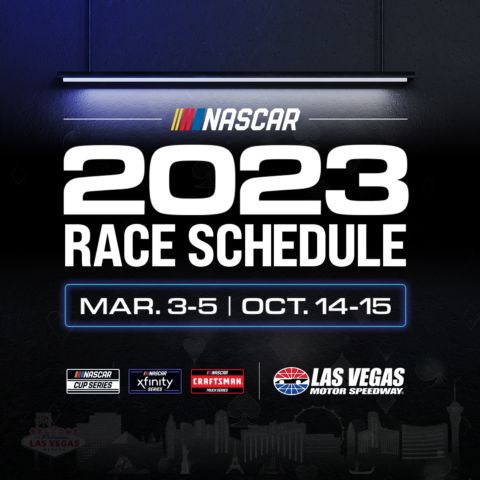 The world’s most competitive form of motorsports will make two stops in Las Vegas for the sixth consecutive year in 2023.

Las Vegas Motor Speedway once again will host two NASCAR Cup Series races next year. NASCAR officials released the 2023 schedule on Sept. 14, bringing the biggest stars in American motorsports back to the Entertainment Capital of the World.

“It’s great for our destination to be one of a select few cities chosen to host two NASCAR races each year,” said LVMS President Chris Powell. “Since 1996, Las Vegas Motor Speedway has delivered some of the most exciting racing in the world, and we’re looking forward to welcoming tens of thousands of race fans from around the globe back to Las Vegas for two more thrilling NASCAR weekends in 2023.”

LVMS will host a tripleheader March 3-5, headlined by the Pennzoil 400 presented by Jiffy Lube on Sunday, March 5. The Alsco Uniforms 300 NASCAR Xfinity Series race will be Saturday, March 4 and the Victoria’s Voice Foundation 200 presented by Westgate Resorts NASCAR Craftsman Truck Series race will kick off the weekend on Friday, March 4. The speedway’s annual fall date, the South Point 400, will be Oct. 15. The South Point 400 will also be the first race of the round eight of the NASCAR Playoffs. The Fall weekend will begin with the Alsco Uniforms 302 NASCAR Xfinity Series race on Saturday, Oct. 14.

Qualifying, practice, start times, TV coverage and fan events will all be announced at a later date. Season, weekend and individual race tickets are on sale now at lvms.com.