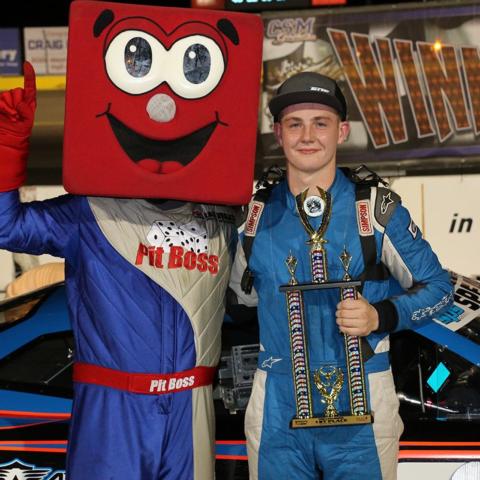 Fireworks were in the air and on the track Saturday night in the popular “Night of Fire” short track racing action with eight main events at the Bullring at Las Vegas Motor Speedway before a nearly full house at the fast paved 3/8-mile oval.

On a hot summer night with eight feature races for the annual ‘Night of Fire,’ the huge crowd saw race-winning streaks continue and several 2021 first-time winners in a wild wheel-to-wheel competition that concluded with a spectacular fireworks display outside of turns three and four at the Bullring.

The hottest driver at the Bullring currently is 15-year-old Tanner Reif of Henderson, NV, with his third consecutive Sigma Performance Services Pro Late Model feature, as the Foothill High School student started on the pole and led the 40-lap main wire-to-wire in his No. 43 Boulder Boats Late Model stock car despite constant pressure from another teenager (age 15), Bradley Erickson of Phoenix, AZ, the 2020 Junior Late Model Series Champion in California, and veteran Jeffrey Peterson of Grand Terrace, CA, a two-time Bullring main winner this year.

Reif, the current Pro Late Model track point leader, has now collected three wins and three runner-up finishes this year at the Bullring in seven events and looks to be on a future path to the next racing levels as he hopes to follow other Las Vegas-bred stock car stars like Kurt and Kyle Busch, Brandon Gaughan, Noah Gragson, and Riley Herbst. The two teenagers, Reif and Erickson, battled bumper-to-bumper early in the 40-lap contest and Peterson entered the fray by lap 10. The top three pulled away from the field by the middle of the main event but a red flag flew on lap 34 with a mid-field crash dropped oil on the racing surface.

After the quick cleanup by the Bullring safety crew, both Erickson and Peterson made valiant attempts to get by Reif on the lap 35 restart but Tanner would have none of it and posted an 0.849-second  $1,000 victory for his third straight Pro Late Model triumph at the Bullring. He also extended his point lead over Peterson as the impressive Erickson made his 2021 Bullring Pro Late Model debut with a runner-up finish. Fourth went Jaron Giannini followed by Scott Gafforini, David Anderson, Johnny Spilatro, Matt Frady and R.J. Smotherman.

“I want to thank Tony Jackson, who worked all week on his car to make a great one tonight,” said Reif. “We had pressure throughout the race, and it feels great to win in front of the big crowd on the ‘Night of Fire.’ It feels great to win three straight at the Bullring.”

Jacks, the 20-year-old Las Vegas racer, took the lead on the opening lap and never look back in a sensational wire-to-wire win over multi-time Modified champion Doug Hamm in Kyle’s first 2021 Modified main event victory. Kyle, with his older brother Sam also in the field, won $1,000 in driving his No. 41 machine to a 2.174-second win Saturday night as he maneuvered his way through lapped traffic to take the checkered flag on the final race before the fireworks display.

“It was hot in the car tonight,” said K. Jacks. “The water pressure was hitting 240 (degrees) and knew she was getting very hot. It was cookin’. It was amazing tonight, and I don’t how I pulled off that move at the start. But the 17 (Mawhinney) raced me clean and it was a great race. I want to dedicate this win to my dad and his birthday tonight. For the past ten years, we have come to the Bullring on his birthday. It’s fun to win here tonight. Thanks to everyone who helps us in the pits and our sponsors.”

Ash captured his fifth Legends Cars feature of the year in his fast No. 11 car, but it was a dramatic drive from the front of the field, back to the rear of the field due to a spin and back through the field for the tight 0.228-second $1,000 win over Jaron Giannini and Jordon Holloway in a wild three-car finish at the checkered flag.

Ash took the lead from the pole with Holloway on his rear bumper for the 11 laps before Dustin spun his mount coming out of turn two on the 12th circuit. Ash had to fight from the back of the pack and got back to third by lap 15 while Giannini and Holloway exchanged the lead. By lap 20, Ash was back in front, but Giannini and Holloway wouldn’t make it easy. Finished fourth was Enzo Lalama followed by Amileo Thomson, Bruce Silver, and Brenden Ruzbarsky.

“Wow, that was the hardest race of the year for me,” said Ash in victory lane. “After I spun, I had to make a real comeback and fight for the lead again. It was my comeback of the year. Thanks for the great fans coming to the Bullring tonight.”

Meyer, a veteran of the Bullring competition, score his first Bombers main event win in six years with a great drive through the field and grabbed the top spot on lap 22 over Connell. Starting sixth, Meyer vaulted in third with his familiar while No. 96 machine by the third lap and then fought hard with Jacob Quartaro for a second while Connell held the advantage for the first 21 laps. By lap 9, Meyer slid by Quartaro for the runner-up slot, but Jacob and his while No. 44 wouldn’t let Pete getaway as they put on a wheel-to-wheel battle for second. On the restart at lap 19, Meyer applied the pressure to Connell who went wide in turn two and Meyer moved to the inside for the lead.

At the checkered flag, it was Meyer with a 0.384-second victory over Connell, Quartaro, Michael Miller and Rob Pfaffly.

“Boy, that was warm, hot and uncomfortable but it was my first main event win in six years,” said Meyer. “I really want to thank Aqua Perfect, and the guys would help prepare the car each week. It’s great to win in front of this big crowd tonight.”

Another first-time Bullring winner this year was Wyatt, the longtime team owner and Truck Series administrator who came from the back of the field for a last lap victory Saturday night in his No. 65 truck. Wyatt fought his way through the 13-truck field in the 35-lap feature as Brandon Schilling and Stan Mullis battled at the front of the pack for the lead.

But on the final lap, Wyatt slid inside of Mullis for the lead and took a 0.373-second win over No. 10 of Mullis and the No. 20 of Schilling. Jeremiah Wagner placed fourth with Mark Allison rounding out the top-five in the Late Model Truck Series finale.

“I need to thank Ken Ash, my spotter, tonight,” said Wyatt. “He did a heck of job for me. I also want to thank all of these great fans who came out to watch the show tonight. Plus, I thank Mike Riefler, my partner in the Late Model Truck Series, for doing a great job running this series. It’s great to win.”

In the crazy 15-lap Full Send Cleaning Service Skid Plate feature, Williams drove from behind to get around early leaders R.J. Smotherman and Dennis Dowell with a 0.639-second Bullring victory. It was Williams’ second main win of the 2021 Bullring campaign as he attempts to close in on Dowell for the series point lead. Dowell placed second at the checkered followed by Smotherman, the infamous Racer X and Larry Dowell.

“That was a wild finish when we were three abreast at the end of the race,” said Williams, who took the win with No. 6 Volkswagen and won $100. “The car has been getting faster. I was just trying to get by those guys without spinning myself out. I don’t have any sponsors right now, but I am always looking.”

Connell had easy run in the 20-lap Super Stock race as he jumped to the lead at the green flag and led the entire distance with a 2.814-second victory over Eric Martin, Mike McKearn and Anthony Mann.

In the USCLI Bandolero finale, Leonard recorded his fifth feature win of the 2021 Bullring season in his No. 17 car with a 2.293-second triumph over Keller Meechudhone with third going to Caden Cordova. Leonard holds a commanding point with three races remaining.

In the opening events of the “Night of Fire,” the two Late Model Truck Series heat races were won by Schilling and Keaton Swane.

A special thanks goes out to the following businesses and individuals for the assistance in the Bullring’s “Night of Fire” including Livestreaming on the Bullring Facebook and YouTube channel and Sigma Performance Service Facebook page.

Another thank you goes out to Sahara of Neon Duet for singing the national anthem, Katy Perry’s Fireworks song and God Bless America, as well as MRO Chaplin, Tony Acosta, and the Honor Guard from VFW Post 36.

NEXT RACE: The Bullring now goes on a summer vacation until Saturday, Sept. 4, for the “Back to School and Throwback Night” with the regular short track racing classes including the Sigma Performance Service Pro Late Models and the NASCAR Power Grade Inc. Modifieds. The Bullring at Las Vegas Motor Speedway event will begin with feature races set for 7 p.m. Gates will open at 5:00 p.m. with practice in all classes set for 5:15 p.m. Opening ceremonies will take place at 6:50 p.m. Children 12 and under will be admitted free with a ticketed adult through the 2021 Bullring season. Tickets may be purchased in advance by visiting or calling the LVMS ticket office at 800-644-4444 or online at LVMS.com.