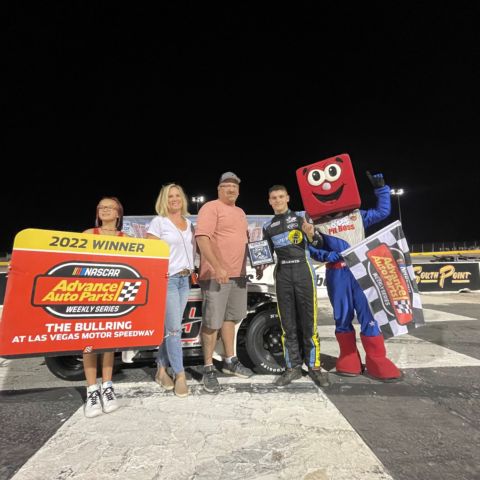 The annual memorial event for the late Las Vegas racing star Spencer Clark brought exciting short track action back to the Bullring at the Las Vegas Motor Speedway Saturday after a three-month summer break at the fast 3/8-mile paved oval near the Las Vegas Strip in Round 8 of the Star Nursery Championship Series.

The talented young Clark was fatally injured in a 2006 highway crash, but he left his mark at the Bullring with numerous wins and an unforgettable passion for the sport. And the Bullring salutes Clark each year with 23-lap features to remind local racing drivers and fans of Spencer’s No. 23.

On Saturday night, the on-track action was hot and heavy with sensational wheel-to-wheel competition and even some over-the-top aggression that nearly caused some penalties for the younger racers. But when the dust settled, it was veterans Jeff Peterson, Doug Hamm, Justin Johnson and Ben Williams taking main event honors with youngsters Vincent Raucci, Landon Lewis, Jordan Holloway, Caden Cordova and Ryan Schank also scoring feature wins.

The hottest action of the Spencer Clark Driven Night was definitely in the M&H Building Specialists/JBM Underground USLCI Legends Cars division with drivers competing from as far away as Florida and North Carolina Saturday in the Twin 23 contests.

National competitor Lewis made his presence known immediately Saturday by driving his No. 99 machine to fast time in qualifying and a very impressive run in the first 23-lapper. Lewis came to the Bullring this month in preparation for the U.S. Legends Car National on Nov. 3-5.

Lewis, who captured 2021 Legends Cars Dirt Nationals, Asphalt Nationals and Road Course Nationals (2nd driver to win all three events in the same season), came from his 20th starting position in the opening Legends 23-lap main to hold off local star Jordan Holloway by just 0.218 seconds at the checker flag.

The 16-year-old Ocean Isle Beach, NC, racer also will return on Oct. 14 for the Star Nursery 150 at the Bullring when he drives the Bill McAnally Racing No. 16 NAPA Chevrolet SS in the ARCA Menards Series West event.

Lewis’ Legends Car win Saturday night wasn’t without drama when a six-car incident on the front straight brought the red flag on lap 11. Montana’s Chase Eisenzimer, also prepping for the U.S. Legend Cars Nationals, took a wild ride with several flips into the infield. Eisenzimer was able to jump out and walk away to the cheers of the Bullring crowd.

The second Legend Cars feature, a national qualifying race, saw Lewis sit out the action and Holloway scored the win with a 1.847-second triumph over Dickens followed By Don St. Ours of Austin, TX, Dawson Sutton of Lebanon, TN, who returned from the first race incident, and Arizona’s T.J. Roberts. Fast race lap went to Carson Brown of Moseley, VA, at 80.679 miles per hour.

“It took us a little time to get the setup right for this Bullring,” said Lewis. “But I like the track and winning the pole helped my confidence. I know Jordan would be tough as we have raced at different track before. I’m looking forward to the ARCA Menards race in October here as well as the U.S. Nationals. The Bullring is a fun place to race.”

Holloway showed strongly with a 1-2 finish in the two 23-lappers Saturday and look forward to the Nov. 3-5 event at the Bullring.

“I pressured Landon as much as possible in the first race,” said the Henderson, NV, driver. “We have raced against each other before and he knew this is my home track. We improved the car for the second main tonight, and it showed in the race with the win. I want to thank the fans and teams for coming out tonight to celebrate Spencer Clark and his family.”

In the 40-lap NASCAR Sigma Performance Service Pro Late Model finale, it was nose-to-tail battle with young Kyle Keller of Las Vegas and veteran Peterson of San Bernardino, Calif., for over 20 laps before Peterson was able to slip inside of Keller on the lap 26 restart in turn one. The California racer then pulled out a 0.471-second win over Keller and Bullring legend Dustin Ash, who came from behind to claim the third spot. Bakersfield, CA, racer Kabe McClenny drove his No. 5 machine to fourth followed by the 15-year-old female driver from Salt Lake City, Kylie Ith, for fifth.

“We had a great battle with Kyle early in the race,” said Peterson, who’ll marry Modified racer Kayli Barker next weekend. “I was hoping he might make a mistake and I could slip by. But he didn’t make one. Then, on the restart, I was able to get inside for the pass. It’s fun to come back to the Bullring and win. I always like racing here.”

Hamm, the multi-time Bullring Modified champion, was planning to retire from racing after the 2021 campaign, but Doug admits his wife wanted him out of the house and doing his hobby, which is racing. So, the Las Vegas racer known as “Hound Dog” came back and continues to amaze his younger competitors in the NASCAR Power Grade Inc. 602 Modified action.

Driving his famed No. 4X machine, Hamm was quick time in qualifying and actually set a race lap nearly two second faster than his qualifying mark. Hamm’s pace was stellar and even his closest rival and a many-time Modified race winner, Justin Johnson, admitted he could stay with veteran Hamm on Saturday night. Hamm scored a 0.549-second victory over Johnson with Barker third in her No. 34+2 car followed by Scott Ozborne and Brian Williams.

“It feels good to be back in the race car after the Summer break here,” said Hamm in the winner’s circle. “The car felt good in the main and I got to the front early which helped. I want to thank the fans from coming out and supporting our racing and the Spencer Clark Driven Night. It’s always fun to win.”

Johnson, doing double duties all season at the Bullring in the Modifieds and Super Stock classes, recorded another Super Stock feature win in his No. 17 mount with a 1.347-second win over Sam Jacks and Anthony Mann. Fourth and fifth went to Mike McKearn and Rich DeLong III.

“The car has been good all season and I hope I can continue to add to my Bullring win total the rest of the year,” said Johnson. “I know that we are getting close to the top of the all-time victory list at the Bullring. We’ll take this win move on. We couldn’t keep up with Doug’s pace in the Modified tonight. He is so good at this place.”

Williams’ victory in the always-wild Skid Plate final was a crazy scene with a larger 13-car field and the defending series champion got the jump on the contenders from the drop of the green flag. Williams took the lead on lap 3 and dodged some on-track carnage for the 9.009-second win over R. J. Smotherman who was seeking his 10th straight Skid Plate win. Third went to Robert Leany who was a former spectator turned racer this year in the Skid Plate division.

“We had more cars this week and that is great,” said Williams. “But many are still learning how to drive these cars and I was dodging a lot of the cars throughout the track. It’s just nice to be back in victory lane again. We hope we can get more competitors in the Skid Plates. It’s fun to drive.”

In the Nostalgia Street Rod Outlaw Factory Stocks, a spectacular three-car battle had the crowd on their feet Saturday night with a late race pass by Vincent Raucci just nipping Jacob Quartaro by just 0.374 seconds at the checkered flag. Early leader Kyle Jacks held the lead for some 20 laps before Raucci and Quartaro slid by at the white flag lap. Then all three finished less than a second apart.

Cordova, a seventh grader from Bakersfield, CA, put in a dominant effort in the 23-lap Junior Late Model feature by leading all laps in his No. 37 stock car after winning the top qualifying spot. Another Californian, Cameron Carraway of Castro Valley, placed 1.145 seconds behind Cordova with Las Vegas’ Bryson Brown, moving from Legends to Late Models this year, took third.

Current point leader Ryan Schank from Barstow, CA, added to his point margin with two main event wins in the 8-lap M&H Building Specialists/JNM Underground Bandoleros class. In both races, Schank had to fight his way to the front after starting in the last row. Tanner Ash put pressure on Schank in both events but had to settle for the runner-up slot in each race. Alexis Bjorck recorded third in the first Bandolero contest with Logan Gresser placing third in the second race.

A special $5,000 purse was posted by sponsor American Southwest Electric for the Legend Cars action Saturday in the Dash and two Main Events.

NEXT RACE: The family fun “Throwback Night” (Round No. 9 in the Star Nursery Championship Series) will be next event at Bullring presented by Star Nursery set for Saturday, Oct. 8 at 7 p.m. The racing competition at 3/8-mile oval which includes the fast NASCAR Power Grade Inc. Modifieds, NASCAR Sigma Performance Series Pro Late Models, Late Model Trucks, USLCI Legends Cars, NASCAR Super Stocks, NASCAR Nostalgia Street Rods Outlaw Factory Stocks, USLCI Bandoleros and the Skid Plate Cars. Gates will open at 5 p.m. with opening ceremonies taking place at 6:45 p.m. Tickets are $8 for adults. Children 12 and under will be admitted free with a ticketed adult through the 2022 Bullring season. Tickets may be purchased in advance by visiting or calling the LVMS ticket office at 800-644-4444 or online at LVMS.com. For stockyard passes please call 800-644-4444, Monday-Friday, 9 a.m.-5 p.m. PST.