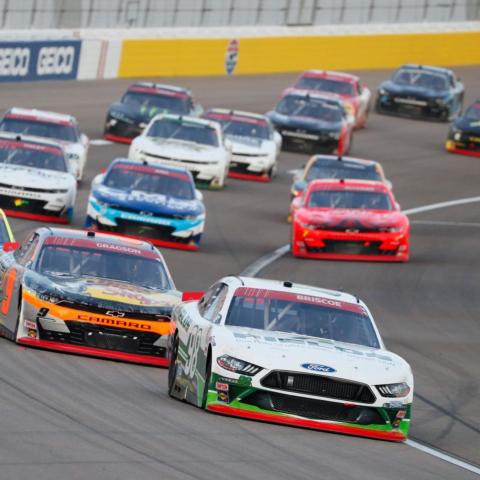 Saturday night’s NASCAR Xfinity Series playoff opener was called the Alsco 300, but had it been called the Chase Briscoe 300, no one would have protested.

“I will definitely sleep easier tonight knowing Talladega and the (Charlotte) Roval are next,” said Briscoe, who picked up his series-best eighth win of the season.

The only real stress Briscoe faced all night came in the race’s final laps when Alex Labbe’s car stalled at the entrance to pit road forcing a caution. On the ensuing restart, Briscoe had to fight off a tough challenge from Las Vegas’s Noah Gragson, but pulled away for the win.

“On that restart, I knew if we could get the lead, then we could make hay,” Briscoe said. “But I spun the tires for whatever reason and took a while to get away.”

For Gragson, it was his best finish ever at his hometown track and he did it while battling a bloody nose that he plugged up with roll bar padding during the race.

“It was a good day for our team,” said Gragson, who received a major points boost with the strong finish. “It’s the best I’ve ever been here. We just didn’t have enough for (Briscoe). There are a lot of race cars our here but only one Space Shuttle. I wanted this one so bad in my hometown. I guess we’ll have to get them next week at Talladega.”

Next up is Sunday’s South Point 400, the opening race of the second round of the NASCAR Cup Series playoffs. Last week’s winner Kevin Harvick and Las Vegan Kyle Busch will start on the front row.