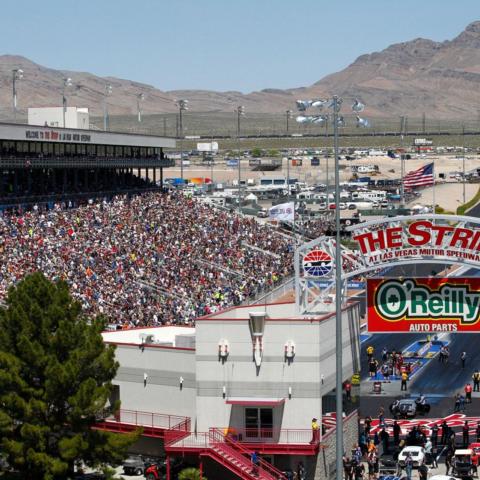 NHRA Summit E.T. Racing Series competitors will compete across the country to become one of the 32 racers to converge upon the Strip at Las Vegas Motor Speedway to compete for the Summit Racing Series National Championships. After a midseason move in 2020, NHRA has announced early this year that the Summit National Championships will once again return to Las Vegas at the Dodge NHRA Nationals presented by Pennzoil October 29-31, 2021.

Thousands of competitors in Super Pro, Pro, Sportsman, and E.T. Motorcycle will compete at participating NHRA member tracks, earning track championship points. Top points earners at the end of the season will be selected to represent their home track in the divisional Summit Racing Series E.T. Finals. Seven Division E.T. Finals events will crown champions in each category who will earn a spot on drag racing’s most prominent stage in Las Vegas to compete for the NHRA Summit E.T. Racing Series National Championship.

The 28 champions from the 7 Division Summit E.T. Finals will be a Wild Card entry filling the eighth spot in each category. The drawing for the four Wild Card spots will be hosted by Brian Lohnes & Alan Reinhart next Monday, March 29th, on NHRA.com. Four lucky divisions will have an extra chance to take the ‘Road to Vegas’ – be sure to tune in next week for the results.

In addition to the 28 champions from the 7 Division Summit ET Finals, will be a Wild Card entry filling the eighth spot in each category. These four lucky divisions will have an extra chance to take the ‘Road to Vegas’ starts at your home NHRA Member Track. To find a Summit E.T. Racing Series participating NHRA Member Track visit the nhra.com/member-track-locator.