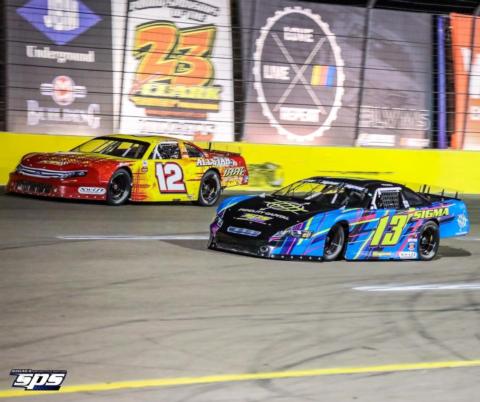 The popular short track action at the fast Bullring at Las Vegas Motor Speedway moved under the lights last Saturday evening in the Presidents' Day Weekend program and the enthusiastic crowd witnessed some sensational competition with a variety of machinery and age groups.

The track conditions proved to be good early with several new qualifying records posted in time trials including veteran Justin Johnson of Las Vegas establishing a new mark in the quick NASCAR Power Grade Inc. 602 Modified division with a clocking of 15.405 seconds, bettering the qualifying record set two weeks ago by multi-time track champion Doug Hamm of 15.432 on the 3/8-mile paved oval.

After another pre-race racer/fan autograph session on the track and fun “big-wheel races” for the kids, it was a full night of bumper-to-bumper, wheel-to-wheel racing that had the crowd on their feet throughout the evening’s program which also celebrated race director T.J. Clark’s 60th birthday.

Once again, Johnson showed his track superiority as he chases the all-time main event victory record at the 38-year-old Bullring oval track. The local racing star added to his win collection with a double feature victory night in the 50-lap Modified finale and the 40-lap Super Stock main.

But while the veteran was continuing his feature win count, it was another impressive night for the teenager racers at the Bullring. Following in the footsteps of racing stars like Chris Trickle, Kurt and Kyle Busch, Spencer Clark, Brendan Gaughan, Noah Gragson and Riley Herbst, the latest contingent of young drivers could be the next Bullring racers to move into the major league racing scene.

Remember the names of Tyler and Tanner Reif, Kyle Keller, Kasey Kleyn, Sean Hingorani, Cody Brown, R.J. Smotherman and Alexis Bjork as they move through the ranks of the short track racing. On Saturday night, they visited the Bullring victory lane with impressive drives in their respective cars.

For Johnson, the night was perfect in both races as he started from the pole position in each contest and never looked back. He jumped to the lead in his No. 17 Al Budd-owner machine in the 50-lapper Modified final and held his advantage to the checkered flag with a 5.538-second win over another local driver, Sam Jacks, in the No. 29 machine. Jacks was the only competitor to finish on the lead lap with third going to his brother, Kyle Jacks, followed by Brian Williams and Court Connell.

In the Super Stock main event, Johnson took the green flag and held off the initial challenges from Bobby Schumacher in the No. 99 car. However, Schumacher’s mount suffered a flat tire with 16 laps remaining and had to pit. Justin then opened the gap to five seconds over David Quartaro. At the finish, Johnson won by 5.664 seconds over Quartaro followed by Don Geary, Gary Griffiths and Anthony Mann. It was 90 laps leading in total for Johnson with two more features to his Bullring record.

“I think those are wins 54 and 55 tonight at the Bullring,” said Johnson. “I need to thank Al Budd for providing me with a strong car in the Modifieds. He lets me do my racing here every time out and I want to thank the fans for their support every year at the Bullring. Al is in Florida watching the Daytona 500 this weekend. I’m glad to give him a victory tonight. We have a great crew too and thanks to them. It’s a busy weekend for our family with my racing and my seven-year-old twin daughters in dancing competition too.”

The best racing of the night at the Bullring came in the USLCI MH Building/JBM Underground Legends cars with some spectacular side-by-side, nose-to-tail racing between many talented teenagers.

Young Cody Brown of Las Vegas, who set a new track record two weeks ago for the Legends car, looked to be the driver to beat Saturday night as he started from the pole. But 14-year-old Tyler Reif of Henderson, NV, grabbed the lead quickly in turn three on the opening lap.

Reif, a runner-up in last year’s Legends points despite sitting out a few months with a broken collarbone, rolled his No. 7 to the point and fought hard with Brown and other youngsters for the lead. But Brown came back and grabbed the top spot on lap eight. He held on in traffic until the 21st circuit when Reif return to the front. A red flag halted the 25-lapper on the 23rd lap when Chloe Lynch and Bryson Brown spun in turn two blocking both racing lines.

On the restart, Reif and Brown were bumper-to-bumper and Cody gave Tyler all he could handle to the checkered flag. But Reif took the win by just 0.038 seconds over Brown with Tanner Reif rounding out the podium (top-three) followed by Hingorani, Josh Gross, T.J. Roberts, Enzo Lalama and Gavin Ray.

“That was not the ideal racing that I wanted to do tonight,” said Reif. “I had to drive a little dirty to get by Cody. He had the car to win, and I had to do what I needed to win too. My car wasn’t all there tonight. It was some very good racing though. I want to thank the fans, my brother and my parents as our crew chief is back working on Tanner’s Late Model car now. Good job, Cody. I’m sorry.”

Despite taking runner-up, Brown was pleased with his performance after Friday’s Young Loins feature win at the Bullring.

“That was pretty intense tonight,” said Brown. “It was back and forth with Tyler. It was a fun race and I have to take second. I want to thank Paul Johnson Drywall, Sherwin Williams, 24/7 Heating & Air and definitely my dad and our crew for helping out on the car. I’ll ready for the next race now.”

Another local teenager proved to the star of the show in the 60-lap NASCAR Sigma Performance Services Pro Late Model main event with 17-year-old Kyle Keller of Las Vegas in a dual with Hingorani, another high schooler from Newport Coast, CA.

Keller, in the No. 12 KKR stock car, stayed nose-to-tail with leader Hingorani from lap one to lap 33 when Kyle slid under Sean in turn three for the lead. The two youngsters continued their bumper-to-bumper battle for the 15 laps before Keller opened up his margin to 1.854-second victory.

“Sean is pretty fast, and I had to use the lapped traffic as an advantage,” said Keller. “After I got by, I knew I had to save my, equipment and watch the traffic in front of me. This win wouldn’t be possible without Dennis Rockford giving me this Pathfinder car and this bad fast car. I want to thank all of our sponsors for their help. This year we are going for “Rookie of the Year’ in the ARCA Menards West Series.”

Kleyn was very impressive earlier in the night with a wire-to-wire victory in his Bullring debut for the Junior Late Model division with a pole position and a 50-lap win in the No. 88 Thaement Farms machine. Kleyn enjoyed a steller evening with his win and third in the Pro Late Model contest.

“I wanted to save the car through the Junior Late Model race since I was going to drive in the Pro Late Model feature too,” said Kleyn, who began racing at age six. “This was my first race in a Late Model here at the Bullring and it was a great way to start. I hope to come back again soon.”

The NASCAR Nostalgia Street Rods Outlaw Factory Stocks division, formerly the Bomber class, saw a doubleheader night with the field competing in a 25-lap opener and a 30-lap night finale.

In the first event, Josh Quartaro of Las Vegas drove the win over 2021 class champion Michael Miller, also of Las Vegas, and his PMR teammates Pete Meyer and Steve Durbin. Jacob Quartaro led for most of the 25 laps, but his mount suffered a flat tire on lap 22 and was forced to the pits. On the restart, Josh Quartaro slid past Miller for the lead and the 0.711-second victory.

In the 30-lap Outlaw Factory Stock main, it was another hard breaker for Jacob Quartaro who led for the first 25 laps but fell back with five laps to go. Durbin, who had suffered mechanical difficulties in recent races, jumped to the lead and didn’t look back for the win. Steven crossed the finish line 0.656 seconds in front of Meyer and Miller in an all-PMR podium.

In the always-popular Skid Plate Car event, another teenager, Smotherman of Pahrump, NV, was victorious in his No. 24 machine over a closing Ben Williams and Berenice Hernandez in her second career start at the Bullring. Fourth went to Robert Leany with fifth to Smotherman’s sister, Dylin.

Bjork, in her No. 7 Bandolero car, showed an impressive pace in the 10-lap USLCI Bandoleros main event Saturday with a 5.556-second victory over Logan Gresser and Tanner Ash. Siena Nuccitelli and Amelia Suell completed the top-five finishes for the young drivers’ class.

NEXT RACE: Round No. 3 for Bullring short track racing will be under the lights on Saturday evening, March 19, with the “Going Green, Gaming Industry Night.” Eight separate divisions will compete at 3/8-mile oval including the fast NASCAR Power Grade Inc. Modifieds in two main events, NASCAR Sigma Performance Series Pro Late Models, Junior Late Models, USLCI Legends Cars, NASCAR Super Stocks, NASCAR Outlaw Factory Stocks, USLCI Bandoleros and the fan favorites, Skid Plate Cars. Gates will open at 5 p.m. with opening ceremonies will take place at 6:45 p.m. Tickets are $8 for adults. Children 12 and under will be admitted free with a ticketed adult through the 2022 Bullring season. Tickets may be purchased in advance by visiting or calling the LVMS ticket office at 800-644-4444 or online at LVMS.com.

38th Short Track Season Opener at The Bullring at LVMS