Thunderbirds to perform flyover for Pennzoil 400 presented by Jiffy Lube 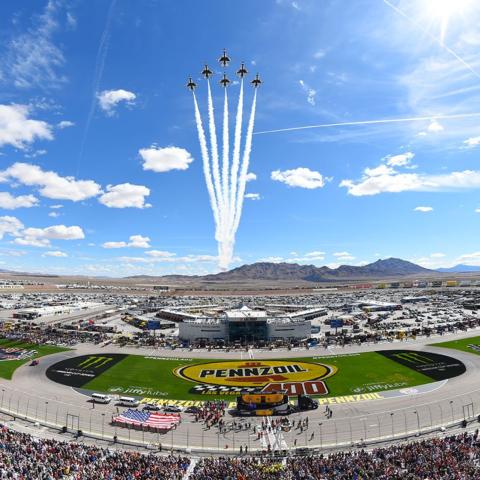 The world-renowned U.S. Air Force Thunderbirds will perform the flyover for the Pennzoil 400 presented by Jiffy Lube at Las Vegas Motor Speedway, March 7.

The "America’s Ambassadors in Blue" – officially known as the U.S. Air Force Air Demonstration Squadron – will electrify the crowd with their signature "Delta" formation over the speedway at the end of the national anthem for the NASCAR Cup Series race.

"We’re honored to have the U.S. Air Force Thunderbirds take to the sky during the Pennzoil 400 pre-race ceremonies," LVMS President Chris Powell said. "For both our fans in the stands as well as those tuning in from home, the sight of the Thunderbirds flying above the speedway will get us ready for the excitement of NASCAR racing.”

The Thunderbirds, stationed at Nellis Air Force Base located adjacent to the speedway, feature six F-16 Fighting Falcons, the Air Force’s premier multi-role fighter aircraft. Created 68 years ago in 1953, the USAF Thunderbirds are the third-oldest formal flying aerobatic team in the world. The Thunderbirds have performed at over 4,000 airshows worldwide, including more than a dozen times at LVMS, accumulating millions of miles in hundreds of different airframes over the course of their more than 54 years of service.

“We are excited to continue the tradition of flying over the Pennzoil 400 in our hometown,” said Lt. Col. John Caldwell, U.S. Air Force Thunderbirds commander and leader. “This race is vital to maintaining the strong bond between the Air Force and NASCAR. We’re thankful to our neighbors at Las Vegas Motor Speedway for their support to Nellis Air Force Base and the incredible opportunity to showcase the pride, precision and professionalism of the 693,000 total force Airmen to race fans viewing this event from around the world.”

The green flag drops on the Pennzoil 400 presented by Jiffy Lube at LVMS at 12:30 p.m. Pacific on Sunday, March 7. The tripleheader weekend kicks off with the Bucked Up 200 NASCAR Camping World Truck Series race on Friday, March at 6p.m. followed by the Alsco Uniforms 300 NASCAR Xfinity race on Saturday, March 6 at 1:30 p.m.

A limited number of tickets and RV camping spaces are available for race weekend. For tickets and camping, please log on to lvms.com. For more information about the U.S. Air Force Thunderbirds, visit afthunderbirds.com.