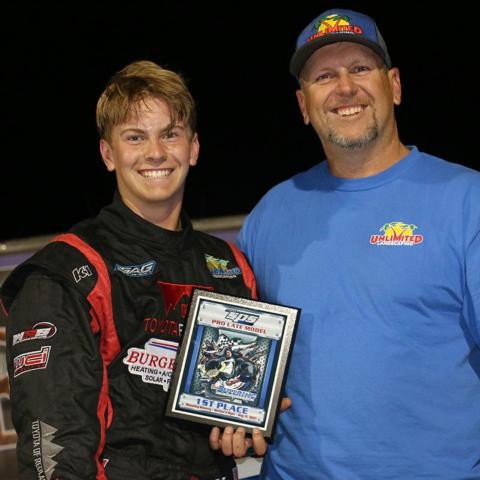 It was a perfect night to celebrate Mother’s Day at the Bullring at Las Vegas Motor Speedway Saturday night with many youngsters thanking their moms in victory lane in Round 2 of the 10-race short-track Series at the fast 3/8-mile paved oval. The first 500 mothers attending Saturday received carnations courtesy of Blooming Memory Flowers.

Teenagers made regular appearances in the winner’s circle Saturday with the most impressive trio racing nose-to-tail for the majority of the 35-lap main event in the Sigma Performance Service Pro Late Model division. Cody Kiemele (age 14), Tanner Reif (age 15) and Jake Bollman (age 14) placed 1-2-3 at the checkered flag.

Following in the footsteps of young Bullring racers like Kurt and Kyle Busch, Brendan Gaughan, Noah Gragson and Riley Herbst, the three top runners in the Pro Late Model feature added up their ages to 43 years. Ironically, Kurt Busch turns 43 in August.

And the three teenagers showed racing experience well beyond their years Saturday as they battled for the coveted victory in front of a spirited spectator turnout that acknowledged their performances at the end of the feature. Sixteen-year-old R.J. Smotherman of Pahrump, Nev., jumped to the lead from his outside front row starting spot at the drop of the green flag. But Reif and Kiemele hounded him for four laps before they took the top two positions.

By lap eight, Reif and Kiemele were bumper to bumper for the lead and they stay that way until lap 25 when the 14-year-old Riverside, Calif., racer slid inside of Reif for the lead in turn three. The Las Vegas teenager wasn’t about let Cody get away as he pressured the leader for five more laps. By lap 30, the four teenagers (14-15-14-16) were nose-to-tail before Kiemele opened his advantage to 1.1 seconds at the checkered flag. Reif took the runner-up slot from the second consecutive Bullring main event with Bollman, of Huntington Beach, Calif., third followed by Smotherman and Scott Gafforini.

“We struggled early with our race car this weekend,” said Kiemele, driving the No. 48 Toyota of Redlands/Burgeson’s Heating & Air Toyota. “Then today we made some adjustments at the trailer and the car was fast after that. Hats off to our crew. We were first in the opening practice and right there in the second practice. We haven’t been in the winner’s circle for three years or so. It’s been way too long. We had some tough racing tonight.”

Reif’s little brother, Tyler, scored his second straight feature win Saturday night by driving his No. 7 Shreddy/Power Gen/Undaunted Apparel Legend car to a close victory over Jordan Holloway in the 25-lap USCLI Legends main event. The 13-year-old from Las Vegas battled with the race leader Holloway for the first seven laps before grabbing the lead. While Reif held his slight margin over Holloway, the 17-year-old high school student originally from Tampa, Fla., the two teenagers kept just a car length between themselves to the checked flag with Tyler claiming the win by 0.810 seconds. Third went to Ethan Niacimento followed by Amileo Thomson and Enzo Lalama.

“The car was little tight, and we had some trouble in the heat race tonight,” said Tyler Reif. “But we were able to get by Jordan and hold him off. It’s great to win again on Mothers’ Night. Thanks for all of the mothers who help at the races. It was a great race tonight.”

A third-generation competitor at the Bullring returned in a triumphant way with Chris Trickle of Las Vegas piloting his Cyber Solutions Chevrolet Silverado pickup to the 30-lap Late Model Truck Series feature win. Trickle put in a superb drive from his ninth starting spot to grab the lead from Keaton Swane in the No. 41 truck on lap 14 and continued to pull away to a 3.229-second victory. Third went to Stan Mullis in a late-race pass over Bill Black and Gary Wyatt.

“Wow, I’m back,” said Trickle. “I didn’t expect to win this quickly after coming back to the Bullring this year. The Cyber Solutions Chevy was stout all weekend here at the Bullring. This win is for my mom. I love you, Mom. We are back, baby!”

Seven-time Bullring Modifieds series champion Doug Hamm came from behind to capture a very close Mojave Construction NASCAR 602 Modified main event Saturday night with his popular No. 4X machine. Hamm, who lost a close race in April to race winner Justin Johnson, had to run down Johnson this time around in a wild nose-to-tail battle for some 20 laps. Similar to Johnson’s move last month, Hamm drove to the inside in turn three on lap 33 to secure the top spot and then hold off Justin in his No. 17 Modified car. Hamm won by just 0.389 seconds over Johnson with third taken by early race leader Peyton Saxton with brother Kyle and Sam Jacks fourth and fifth.

“It’s fitting that we won on Mother’s Night as I lost my mother this past year,” said Hamm, a Las Vegas truck driver during the week. “We all want to thank our moms for all they do for us. I know my mom was looking down on me tonight.”

Veteran Adam Simon of Overton survived a wild race with Jacob Quartaro in the 25-lap NASCAR Nostalgia Street Rods Bombers feature to capture his first 2021 main event, as Simon, second in last month’s Bomber main, led wire-to-wire driving in the inside lane throughout race. Quartaro made numerous attempts on the outside to pass Simon for the lead but Adam held his advantage and took the checkered flag by just 0.290 seconds. Court Connell of Las Vegas was in a three-car battle with the leaders for much of the race before settling for third followed by Pete Meyer and Michael Miller.

“That was an adrenaline rush tonight,” said Simon. “The race got close at the end. The car started fading the last few laps and I thought he was going to bang on my door. This win is for my mom, a great way to celebrate Mother’s Day.”

Another teenager came back to win his second 2021 feature Saturday with Ashton Leonard of Henderson taking the 12-lap USLCI Bandoleros Bandit event over Alexis Bjork and Keller Meechudhone. Fourth and fifth went to Logan Gresser and Elliana Griffiths.

NEXT RACE: The Bullring at Las Vegas Motor Speedway holds a special West Coast Stock Car/Motorsports Hall of Fame Night, honoring legends Richie Clyne, Craig Keough and Jerry Pitts, this Saturday, May 15, with the third round of the 2021 10-race series featuring all of the regular divisions beginning at 7 p.m. Gates will open at 5:00 p.m. with qualifying set for 5:15 p.m. A special autograph session with Bullring drivers and Hall of Famers will take place at 5:45 p.m. Opening ceremonies will take place at 6:45 p.m. Children 12 and under will be admitted free with a ticketed adult through the 2021 Bullring season. Tickets may be purchased in advance by visiting or calling the LVMS ticket office at 800-644-4444 or online at LVMS.com.