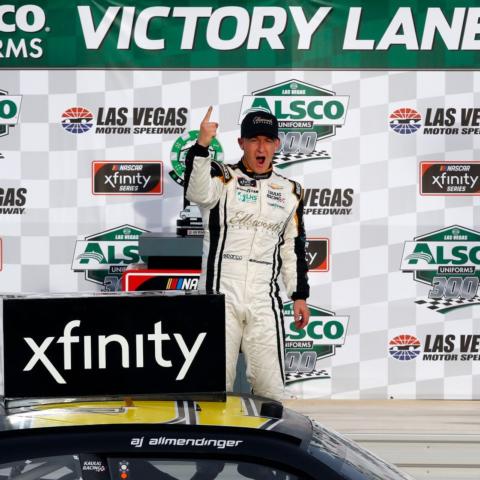 A.J. Allmendinger was first to the checkers Saturday afternoon at the Alsco Uniforms 300 at Las Vegas Motor Speedway.

The NASCAR Xfinity Series (NXS) drivers put on quite a show for nearly 13,000 race fans as A.J. Allmendinger fought his way to the finish line in Saturday’s Alsco Uniforms 300 at Las Vegas Motor Speedway (LVMS). Allmendinger earned his first NXS win at LVMS in his first NXS start at the Nevada speedway, locking in a spot in this year’s playoffs.

“The car was dialed in today,” said Allmendinger, driver of the No. 16 Chevrolet. “The victory is very important, but I take more pride in how we’ve run as an organization. I was enjoying watching [Justin] Haley try to take the lead from [Austin] Cindric more than I enjoyed leading the race myself, because it shows all of our cars are strong.”

Allmendinger credits the entire Kaulig Racing team with constantly improving and putting him in position to win each week, and he’s extremely thankful for the opportunity to race.

“I’m not Kyle Busch. I don’t have a hundred wins just in the Xfinity Series,” said Allmendinger. “Those of you who have been with this sport for a while have seen the ups and downs of what I went through. I have a great opportunity, and I don’t want it to be my last win. I’m not getting any younger, but quite honestly, I think I’m getting better with age.”

“The pit crew on our team is unbelievable,” said Hemric, driver of the No. 18 Toyota Supra. “Never in my career have I had this much confidence. I’m so thankful to have them on my side and have them have my back.”

Brandon Jones, Austin Cindric and Las Vegas native Noah Gragson, who has never finished below sixth at his hometrack, rounded out the top five.