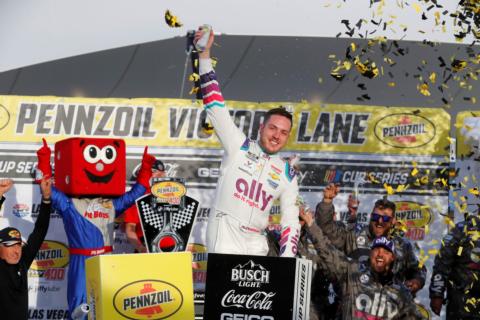 Alex Bowman took advantage of a late-race caution to line up on the front row next to Kyle Larson and held off his Hendrick Motorsports teammate in overtime to capture the victory in the 25th annual Pennzoil 400 presented by Jiffy Lube.

“Man, what a call by Greg Ives (crew chief) and the guys to take two (tires) there. Obviously, it paid off. Racing Kyle (Larson) is always fun. Got to race him for a couple wins. We've always raced each other super clean and super respectfully. Just can't say enough about these guys. It's been a pretty awful start to the year, so to come out here and get a win on a last restart deal is pretty special.”

The green flag waved over the Pennzoil 400 presented by Jiffy Lube field just before 1 p.m. Las Vegas time with front row drivers Bell and Larson quickly separating themselves from the rest of the 37-car field for the 267-lap, 400-mile showdown. Bell gapped his closest challenger by a second after the first five laps and two seconds by Lap 20. NASCAR threw a competition caution on Lap 30 with pole winner Christopher Bell (No. 20 Joe Gibbs Racing Toyota), JGR teammate Denny Hamlin (No. 11 Toyota), Ryan Blaney (No 12 Team Penske Ford), Bowman (No. 48 Hendrick Motorsports Chevrolet) and Larson (No. 5 Hendrick Motorsports Chevrolet) rounding out the top five.

The race restarted on Lap 36 with Blaney out front followed by Bowman and Hamlin. The caution came out three more times over the 45 laps remaining in Stage 1 but the racing that took place in between was fierce with Bowman, Hamlin, Las Vegas’ Kurt Busch (No. 45 23XI Racing Toyota), and William Byron (No. 24 Hendrick Motorsports Chevrolet) all leading laps. Bowman took the green-and-white checkered flag at the conclusion of Lap 80 to win the stage. The balance of the Top 10 were Byron, the No. 1 Trackhouse Racing Chevrolet of Ross Chastain, Hamlin, the No. 9 Hendrick Motorsports Chevrolet of Chase Elliott, Larson, Blaney, the No. 14 Stewart-Haas Racing Ford of Chase Briscoe, the No. 18 JGR Toyota of Las Vegas’ Kyle Busch, in a backup car after crashing in practice Saturday, and pole winner Bell.

STAGE 2 began on Lap 87 with Michael McDowell (No. 34 Front Row Motorsports Ford), who didn’t stop for tires and fuel, and Brad Keselowski’s No. 6 RFK Ford on the front row. Keselowski led for five laps before Hamlin grabbed the lead on Lap 91. Caution waved the next when Briscoe got sideways off Turn 4 and made contact with the No. 99 Trackhouse Racing Chevrolet of Daniel Suarez who then smacked the front straight wall.

Hamlin led for the Lap 98 restart with Chastain, Byron, Bowman and Kyle Busch in tow. On Lap 103, Keselowski spun in Turn 4 and collected Blaney in the process. Keselowski continued but Blaney’s day was done.

Kyle Busch and Austin Dillon stayed out so led the field back to green on Lap 110. Busch stayed at the point for three laps before Chastain assumed the top spot with Larson taking second. The field stayed green for 30 laps, with Chastain, Hamlin and Larson out front, before Briscoe spun in Turn 3 on Lap 134 which then caused Austin Cindric (No. 2 Team Penske Ford) to spin behind him. All the lead-lap cars pitted on Lap 137 with Larson beating Chastain off pit road by just a nose.

Larson, Chastain, Bell, Elliott, Kyle Busch and the No. 19 JGR Toyota of Martin Truex Jr., led the restart on Lap 140. The race’s ninth caution flag waved two laps later when Bell and Briscoe spun off Turn 2, but both were able to drive away.

Racing resumed on Lap 148 with Larson out front. The action stayed green for the 18-lap dash to the end of Stage 2 with Chastain earning the first stage win for Trackhouse Racing and the rest of the Top 10 including Elliott, Larson, Byron, Kyle Busch, Truex, the No. 22 Team Penske Ford of Joey Logano, the No. 4 Stewart-Haas Ford of Kevin Harvick, Hamlin, and the No. 23 23XI Racing Toyota of Bubba Wallace.

The final stage of the Pennzoil 400 presented by Jiffy Lube fired off on Lap 175 with 93 remaining with Chastain at the point and Kyle Busch alongside, followed by Larson, Elliott, Truex, Harvick, Logano, Hamlin, Tyler Reddick and Wallace.

Chastain and Busch checked out by lap 190, nearly four seconds ahead of Truex, Larson and Elliott. The field settled in over the next xx laps with Chastain leading Truex, Busch, Bowman and Larson before the leaders began pitting under green on Lap 218.

Hamlin spun on Lap 219 when, coming off pit road, pushed the new sequential shifter forward instead of backward, breaking the transmission and bringing out the caution. Busch, Chastain, Truex, Bowman, Stenhouse, Ty Dillon, Daniel Hemric, Byron, Reddick and Harvick made up the Top 10 when racing resumed on Lap 227.

Truex chased down his JGR teammate with 12 to go and the battle for the win was on. They battled bumper to bumper and side to side while dealing with traffic. But what was setting up for a final-lap battle to the finish line disappeared with three to go when the No. 42 Petty GMS Motorsports Chevrolet spun off Turn 4 and made hard contact with the wall. Wallace then clipped him on the way by and tagged the inside wall going into Turn 1.

All the leaders came down for tires, with the Hendrick cars of Larson, Bowman and Byron only taking two scuffed tires and lining up in that order for the two-lap overtime restart with Busch fourth, Chastain fifth and Truex sixth … each on four scuffed tires. Bowman and Larson jumped ahead and battled for the win, with Bowman edging out his teammate.