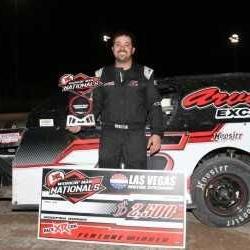 That’s true in a few senses, as the driver out of Arvada, Colorado, dominated on Saturday night at The Dirt Track at Las Vegas Motor Speedway to cap off the inaugural event with a Modified victory. Ursetta went wire-to-wire, starting on the pole and never relinquishing the lead as he ripped around a cushion that was just inches from the wall.

On Wednesday night, Ursetta began race week by posting the fastest lap in open practice, but over the next two nights, couldn’t quite find the speed to get his No. 6U up front in his mains. He got a perfect draw on Saturday then drove a perfect feature.

Ursetta accumulated a more-than-5-second lead through the first 12 laps of the 25-lap, $2,500-to-win feature, but a string of cautions, and a hungry Cody Laney, tested his mettle. On the first of four restarts, Laney threw a bomb down into Turn 1, nearly clearing Ursetta’s machine. But Ursetta didn’t falter, driving past Laney on the outside.

“I gotta thank everybody, my whole family. Some of them weren’t lucky enough to be here. They were at work and not at the Workin’ Man Nationals,” Ursetta said in Victory Lane. “The track was great all weekend. I’m coming back next year and looking forward to it.”

It was another battle of top versus bottom as two distinct lines were working in the 20-lap, $1,000-to-win Stock Car feature. Kyle Genett took it top shelf on the way to a win in a fantastic battle with Shelby Williams. Genett (Auburndale, WI) motored past leader Williams with six to go, working the cushion for the duration of the feature. Conversely, Williams kept his left front on the tractor tires, a testament to another racy racing surface on Saturday night. Genett grabbed the lead then slowly drew away from Williams. Williams tried to mount a charge on the top side in Turns 1 and 2 over the final few laps to no avail.

“It feels awesome. It’s a dream come true,” Genett said. “I ain’t a guy to run the outside. I’m a guy that runs right on the tractor tires. It’s amazing the outside runs that good here. We put it up there and got it done.”

Saturday was the second time Genett had taken the checkered flag first at the Workin’ Man Nationals, but his Thursday night victory was nullified due to failing post-race technical inspection. Williams was granted the victory on Thursday, and Bubba Stafford Jr., who won on Friday, finished sixth on Saturday.

In Sport Mods, Chase Alves drew the pole and led wire-to-wire, holding off Cody Lee to take the 20-lap, $1,000-to-win feature, his second victory in three nights. Lee, who won Friday night’s main event, took a couple stabs on Alves (Casa Grande, AZ), but couldn’t grab the lead. Alves simply rolled the top to the checkered flag. Lee was catching Alves as the two came upon traffic midway through the feature, but a yellow flag cleared the way for Alves to hit his marks.

“It’s so scary driving that thing up there all the way to the fence,” Alves said in Victory Lane. “I gave up the win by not being there (Friday) night and I made myself do it tonight. You gotta have a lot of trust in your car.”

Casey Delp and Jason Ingalls won the Modified B Mains.

The Dirt Track at Las Vegas Motor Speedway will be back in action with XR Events again at the Nov. 9-12 Duel in the Desert. The Duel will kick off an unprecedented seven-event winter schedule featuring the new Silver State Super Speedweeks and 10 nights of Super Late Models Jan. 17-21 and Feb. 21-25. Event info can be found at www.racexr.com.

The Dirt Track at Las Vegas Motor Speedway is one of the hidden gems on the speedway’s 1,000-acre property. The half-mile oval hosts a variety of races, including the Karl Chevrolet Duel in the Desert and has become a fan-favorite among dirt track racing enthusiasts. The world-class half-mile groomed clay oval is banked at approximately 10 degrees. The infield measures 780 feet by 375 feet and is available for excavation up to six feet deep. The facility includes two enclosed suites accessible by elevator and permanent restroom facilities. The adjacent paddock area is lighted and measures 500,000 square feet.