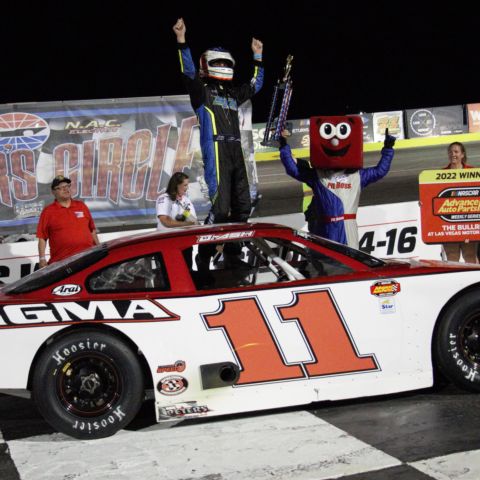 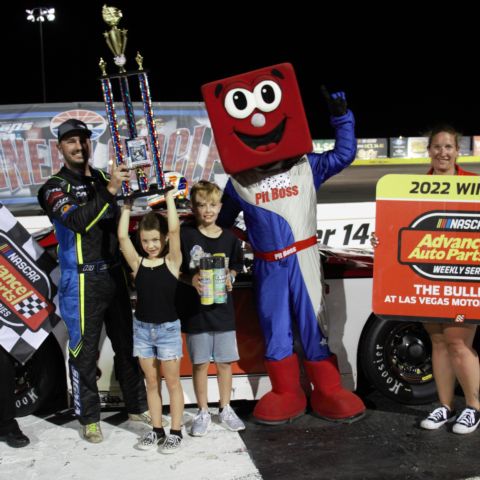 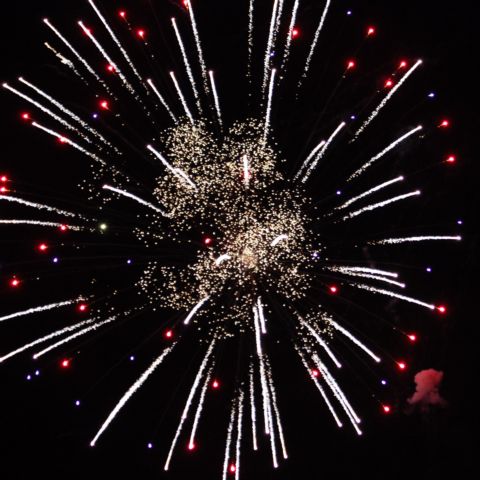 The huge crowd Sunday night at the Bullring presented by Star Nursery was thrilled by ‘fireworks’ on the track and in the sky in the annual “Night of Fire” short track spectacular at the fast 3/8-mile paved oval south of Las Vegas Motor Speedway.

The jammed grandstands and the popular “Stockyards” area outside of Turns 3 and 4 of spectators saw everything from exciting “door-to-door racing” to “waterless boat races” and from “bumper to bumper” action to “lights in the sky” in the popular Independence Day celebration.

On the track, the nine separate classes of competition didn’t disappoint in some of the best racing of the 2022 Bullring presented by Star Nursery season, as Round No. 7 saw some familiar faces in victory lane as well as several talented young racers claiming wins too.

In the 50-lap NASCAR Sigma Performance Services Pro Late Model feature, Dustin Ash of Las Vegas, the veteran race car builder, continued his winning ways in the No. 11 SPS stock car with his fourth consecutive Bullring main event victory this year dating back to April. Ash didn’t have an easy time early in the 50-lapper as he started eighth and quietly moved his way to the front.

A red flag came out on lap 15 when Scott Gafforini spun in turn four and collected Houston Simonette. At the restart, Ash took the advantage with a pass on early leader Kylie Ith, the 15-year-old high schooler from Salt Lake City, UT. Ith fought Dustin for the lead before Ash stretched his margin to a second by lap 18. Holding the lead throughout the checkered flag, Ash took his fourth win by 1.184 seconds over Jonathan Mawhinney, Matt Frady Jr., Monty Tipton, Aaron McMorran, Amileo Thomson and Ith. Early contenders Kyle Keller and Chris Clyne dropped from the lead pack with difficulties and placed 12th and 13th respectively.

“Late in the race, I saw a few guys closing in and didn’t know where they were going to make a move,” said Ash., the Pro Late Models fastest qualifier. “It’s nice to win on a big night here with the large crowd. That is our fourth win in a row at the Bullring. The car was good tonight and the guys at SPS didn’t a great job preparing it. They have been working hard at the shop. Thanks to the fans for coming out tonight.”

Another Bullring veteran, Doug Hamm, the seven-time track champion, also scored his fourth 2022 feature win in the 35-lap NASCAR Power Grade Inc. 602 Modifieds finale with a relatively easy 6.010-second triumph despite running a limited schedule this year. Hamm, nicknamed the “Hound Dog,” started fourth and quickly grabbed the lead by lap two. His chief Modifieds rival, Justin Johnson, moved into the second spot and looked to close gap on Hamm by lap ten. But, four laps later, Johnson was forced to the infield with a mechanical problem.

With Johnson out, Hamm held a large lead and the battle on the 3/8-mile oval was for second with Sam Jacks, Kayli Barker and Jaron Giannini all in a nose-to-tail skirmish before Giannini, the fastest Modifieds qualifier, was able to secure the runner-up position. Barker finished third followed by Sam Jacks, Kyle Jacks and R.J. Smotherman.

“I feel lucky to be racing here,” said Hamm. “I have a beautiful wife, a great family and a super group of friends and family in the ‘Stockyards’ tonight who support my racing. The great fans make it exciting for us to race in front of a big crowd. I believe this is my last race of the year, but it was fun. I thought I would retire after last year, but my wife said to keep going. I might make another sneak appearance later this year. You never know.”

Johnson, in a battle with Ash and Hamm for the all-time Bullring main event victories, continued the veterans winning Sunday night with a great battle with Sam Jacks in the 25-lap NASCAR Super Stocks feature that saw the crowd on their feet with side-by-side action for some ten laps. Johnson, a six-time Super Stocks race winner this year, fought hard to get to the inside for the final pass on Jacks at the checkered flag with a tight. 0.298-second win. Jacks had to settle for the runner-up spot followed by Mike McKearn, Adam Simon and Rod Pfaffy.

“That was awesome race with Sam,” said Johnson. “I thought the motor was going south, so I wanted to finish off with those winning burnouts at the finish line. But it kept going. Hats off the great fans here tonight. Thanks to Al Budd, my family and crew for letting me race here. We hit the wall in our last race here and the guys did a super job repairing it and making it fast tonight.”

While the veterans showed their mettle by taking main events, the youngsters were successful too as 14-year-old Tyler Reif scored his second USLCI M&H Building Specialists/JBM Underground Legends Cars finale with an impressive win over Bullring point leader Jordan Holloway. Reif, driving this year in the West Coast Spears Pro Late Model tour where he sits second in points, returned to the Bullring in a limited appearance with his popular No. 7 machine.

Reif, starting 14th in 21-car field, battled his way through the field to move to fifth by lap eight, but took the lead after a restart on lap ten. He and Holloway, a four-time winner this year at the Bullring, pulled away from the field to establish a great two-car conflict. The two teenagers ran bumper-to-bumper for many laps before Reif took the victory by just 0.432 seconds. Third went to Amileo Thomson followed by Cody Brown, Robby Czub, Cody Winchel and Josh Gross.

“I think we actually had the second-place car tonight, but we had the first-place driver at the finish,” said Reif, a multi-time 2021 Legends feature winner from Henderson, NV. “I had to fight my way through the field early. But I’ll definitely take the win. I want to thank my sponsors, my parents and family and all of the fans for this great crowd tonight. It’s awesome to race on the ‘Night of Fire.’”

Another teenager in the Bullring winner’s circle Sunday was popular R. J. Smotherman from Pahrump, NV, with his sixth Skid Plate main victory in his No. 24 car. Smotherman, who also competes in the Modifieds and Pro Late Models, was penalized for his many wins in the popular Skip Plate division and had to start the 15-lap feature from turn two. The 12-car field proved to a wild affair as Smotherman had to navigate his way through various spins and collisions around the 3/8-mile oval.

Smotherman finally took the advantage on lap 10 and cruised to another Skid Plate triumph with a 6.3-second victory over Robert Leany followed by Jeff Dailey, Berenice Hernandez, Tommy Suell and Dylin Smotherman, R.J.’s sister. The dastardly “Racer X” returned Sunday for Skid Plate action but was immediately disqualified for his rough driving in the main event.

“Wow, that one wasn’t easy,” said Smotherman. “This is my dirt car and it got torn up tonight. But it was fun as usual. You have to ride the throttle and the brake at the same time to get around here. It’s amazing to race in front of pack stands tonight. Thanks so much from coming out. We had more Skid Plate cars again. Please build some more cars and bring them out. It’s very fun racing.”

Ryan Schank of Barstow, CA, kept the young drivers’ success going in the crowd-pleasing USLCI M&H Building Specialists/JBM Underground Bandoleros 12-lap event with his third feature win of the season at the Bullring in his potent No. 8 machine. It wasn’t easy for Schank who led from the first lap to the checkered flag as Logan Gresser and Joseph Montoya applied the pressure on the final lap. Schank’s win was by just 0.273 seconds. Fourth went to Alexis Bjork followed by Steven Scaldo Jr., Piper Suell, Amelia Suell and Tanner Ash.

In the 25-lap NASCAR Nostalgia Street Rods Outlaw Factory Stocks final, Jacob Quartaro of Las Vegas made an impressive come-from-behind drive with his No. 44 car to score his first feature win of the 2022 season. Quartaro had to drive from his eighth starting position and fight off early leaders Vincent Raucci and Kyle Jacks before taking the 1.472-second victory over Jacks with third going to defending class champion Michael Miller. Rounding out the top-five were Pete Meyer and Sheri Goldstrom, who drove back to fifth after an early spin.

The Late Model Truck Series returned to the Bullring Sunday evening with a great race for the lead in the 35-lap main event with David Levitt, in only his second Bullring appearance, holding off veteran Mark Allison at the checkered flag by just 0.442 seconds, The Sierra Vista, CA, driver took the lead on lap 12 and drove a solid, consistent pace to keep Allison at bay. Third went to another Bullring veteran Stand Mullis followed by Chloe Lynch, Bill Black and Gary Wyatt. Levitt and Mullis captured the 6-lap preliminary heat races at the beginning of “Night of Fire” program.

Before the sensational fireworks display Sunday night, the oval finale was the wild and crazy “Waterless Boat” race which featured eight cars chained with old boats. The “Waterless Boats” raced for ten minutes, and two trucks attempted to cut the boat chains from the race cars. At the time limit, just two cars – Berenice Hernandez and Tommy Suell – completed the event with their respective boats still attached. Needless to say, there was an array of fiberglass and wood spread around the oval track at the checkered flag.

The Bullring presented by Star Nursery action will now go on a “Summer Break” and will return for the next race on Saturday, September 24, with the annual “Spencer Clark Driven Night,” honoring the young Bullring racing star who was tragically killed in a highway incident in 2006.

NEXT RACE: The annual “Spencer Clark Driven Night” (Round No. 8 in the Star Nursery Championship Series) will be next event at Bullring presented by Star Nursery set for Saturday, Spet. 24 at 7 p.m. The racing competition at 3/8-mile oval which includes the fast NASCAR Power Grade Inc. Modifieds, NASCAR Sigma Performance Series Pro Late Models, Late Model Trucks, USLCI Legends Cars, NASCAR Super Stocks, NASCAR Nostalgia Street Rods Outlaw Factory Stocks, USLCI Bandoleros and the Skid Plate Cars. Gates will open at 5 p.m. with opening ceremonies taking place at 6:45 p.m. Tickets are $8 for adults. Children 12 and under will be admitted free with a ticketed adult through the 2022 Bullring season. Tickets may be purchased in advance by visiting or calling the LVMS ticket office at 800-644-4444 or online at LVMS.com. For stockyard passes please call 800-644-4444, Monday-Friday, 9 a.m.-5 p.m. PST.