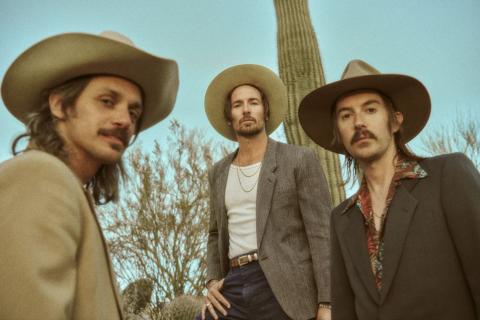 Chart-topping country music group Midland will bring its talent to the pre-race stage to headline festivities for the Pennzoil 400 Presented by Jiffy Lube on Sunday, March 6 at Las Vegas Motor Speedway.

Known for such hits as “Drinkin’ Problem” and “Burn Out”, Midland will make its first appearance ever at Las Vegas Motor Speedway prior to the annual NASCAR Cup Series race.

“We’re thrilled to have one of country’s hottest acts kick off the Pennzoil 400,” said LVMS President Chris Powell. “Midland is incredibly popular with our race fans and we know the guys will put on a great show to get everyone’s motor running for the green flag.”

It will be the second of back-to-back performances in Las Vegas for the trio. Midland will headline at The Theater at Virgin Hotels Las Vegas, part of Curio Collection by Hilton, on Saturday, March 5 as part of its Last Resorts Tour. The band is expected to take the stage at the speedway at approximately 11 a.m.

Tickets for the Pennzoil 400 still remain by visiting www.lvms.com or calling 1-800-644-4444 and stage-front passes for Midland can be found here. For tickets to see Midland at The Theater at Virgin Hotels Las Vegas, please click here.