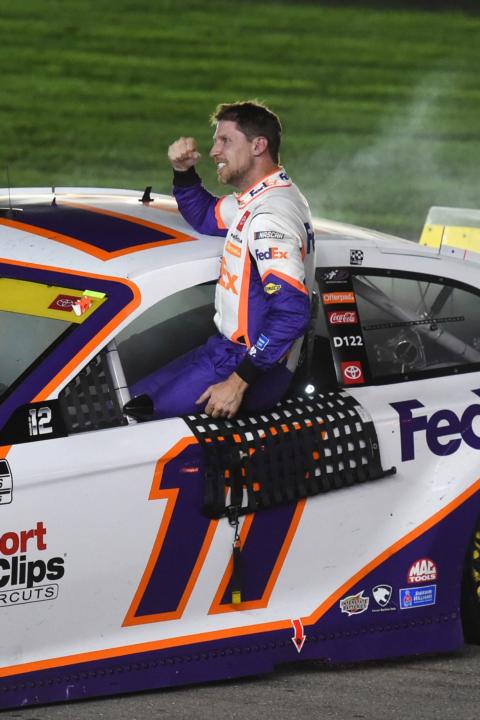 Denny Hamlin didn’t win a race during the NASCAR Cup Series’ 26-race regular season. Four weeks into the Playoffs, he’s won twice and is now locked into the Round of 8.

Hamlin held off a late charge from Chase Elliott in Sunday’s South Point 400, claiming his 46th career win and his first in 20 tries at Las Vegas Motor Speedway.

The driver of the No. 11 FedEx Office Toyota started sixth, won Stage 2 and led a race-high 137 of 267 laps in becoming the third Joe Gibbs Racing driver to score a Las Vegas victory.

“I’m just so happy for our FedEx Office team,” Hamlin said. “Toyota and Joe Gibbs Racing gives us great race cars. I’m so proud to drive for those guys. It feels so good to win at Vegas. The last few times I’ve been so close, but I didn’t get the breaks.”

For a while, it appeared that Hamlin was in store for more of the same: a strong race, but no trophy.

Polesitter Kyle Larson led the field to green but lost the lead to Ryan Blaney on the race’s first lap. Hamlin moved to the front on Lap 8 and held the advantage through a Lap 25 competition caution. Larson, the series points leader, passed Hamlin for the lead on Lap 45, won Stage 1 and wound up holding the top spot for 96 laps.

Larson’s No. 5 Tarlton and Son Chevrolet finished 10th, however, after opting to stay out on a caution period. The decision bit Larson and Hendrick Motorsports teammates William Byron and Alex Bowman – costing the trio valuable track position when they were forced to pit before the end of Stage 2.

Byron rallied back into the top five, but a flat tire relegated him to 18th at the finish. Bowman was also felled by a flat tire that left him 22nd. Both Playoff drivers left Las Vegas needing a bounce-back effort to bolster their championship hopes.

Hamlin, on the other hand, said he feels no pressure.

“I’m so happy that I don’t have to worry about the next two weeks,” Hamlin said. “I’m a professional, so I’m going to work just as hard, each and every week, to win.”

Fans can see Hamlin, Elliott and all of NASCAR’s biggest stars again at the Pennzoil 400 March 4-6, 2022. Tickets are available at www.LVMS.com.