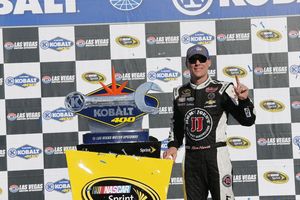 Kevin Harvick, the 2015 Kobalt 400 champion, is a 4-1 favorite to win the 20th staging of the Monster Energy NASCAR Cup Series race at Las Vegas Motor Speedway on Sunday.

Boyd Gaming, which will sponsor Saturday's Boyd Gaming 300 for the 20th consecutive year, has Harvick as the odds-on favorite to win the 267-lap race at the 1.5-mile speedway, with defending champion Brad Keselowski next at 5-1. Four-time Kobalt 400 winner and seven-time Monster Energy NASCAR Cup Series Champion Jimmie Johnson is part of a quartet listed at 6-1 that includes Las Vegas' Kyle Busch, Joey Logano and Chase Elliott.

Click HERE to see the complete odds, courtesy of Boyd Gaming Events, for both races.

Fans can find a complete weekend schedule on the speedway's website, and tickets to all LVMS events are available by calling 1-800-644-4444 or logging on to www.LVMS.com.

The 2020 Fall NASCAR Weekend hosts the NASCAR Cup Series, the NASCAR Xfinity Series, and the NASCAR Gander RV & Outdoors Truck Series, all of which will be finishing under the lights!