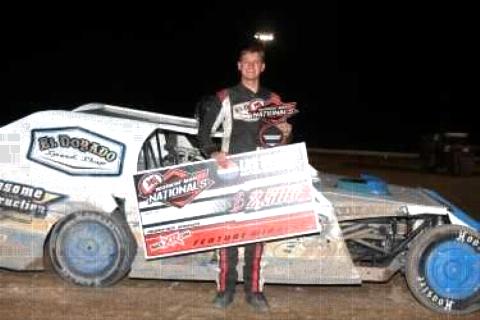 LAS VEGAS (February 11, 2022)—Kollin Hibdon showed his strength when things go smoothly, methodically driving to the front and winning the Modified feature on Night 2 of the inaugural Workin’ Man Nationals.

After enduring mechanical issues on Thursday, everything went right for Hibdon on Friday, and the young driver used an inside move on a restart to wrestle the lead away from Cody Laney midway through the Main Event, then cruised to the $2,500 Modified win. Bubba Stafford Jr. (Stock Car) and Cody Lee (Sport Mod) were also Night 2 winners at The Dirt Track at Las Vegas Motor Speedway.

Over the past two nights, Hibdon was consistently superior to everyone off Turn 2, making up time and making passes. That’s exactly where he got it done on Friday. Starting inside the second row on the Delaware Double-File restart as Laney rolled the top, Hibdon stuck the bottom, pointed his No. 48K off the corner and took the lead with 13 to go. Laney fought back, but Hibdon held the top side and drove away.

“It was pretty hard work racing with both those Codys,” said Hibdon, referencing Laney and Thursday night’s winner Cody Thompson. “They’re two of the fastest guys in the country. We just had to get to the front and be smart. I happened to get lucky with one restart and it turned out pretty good.”

Lucky? Good? Same difference. Hibdon (Pahrump, NV) started ninth and was up to third just two laps into the Main Event, but certainly had to earn everything he got Friday night.

Thompson held the early lead from the break and was fending off challenges from Grey Ferrando and Laney through a set of early caution periods. Laney made a daring top-to-bottom move on a Lap-11 restart, slashing under Thompson for the lead. Hibdon followed Laney and the three traded blows before Hibdon came out on top.

“The main thing was keeping your car nice and straight and fast,” Hibdon added. “You had to keep it steered on the right front and keep it under ya.”

Bubba Stafford Jr. was patiently aggressive, made his move and drove away to claim the 20-lap, $1,000-to-win Stock Car feature. Stafford (Wittman, AZ) drove from ninth to second in just two laps and stalked leader Jason Josselyn for the next few circuits. Stafford motored past Josselyn with 12 to go and proceeded to drive on to a 4.049-second win.

“I blew up my motor at the Winter Nationals and (fellow driver) Scott Sluka put a motor in this thing. To be able to make it here tonight and to win it is just awesome,” Stafford said in Victory Lane. “I can’t thank everyone who helped me enough.

“The track has been so much fun. I love running the top side of this place. You gotta put your cojones over your shoulder and get after it.”

It was Stafford’s second Stock Car win at The Dirt Track at Las Vegas Motor Speedway. He picked up a preliminary night win at last November’s Karl Chevrolet Duel in the Desert.

In Sport Mod action, Cody Lee used a perfect slide job to secure the victory in the 20-lap, $1,000-to-win ­feature. After a restart with six laps to go, Thursday night’s winner Chase Alves held the lead, but Lee rolled the top and reeled him in. The two were dead even at the stripe with five to go, Lee on the top, Alves on bottom. Lee (Starbuck, MN) crossed Alves over off Turn 2 and slid his way to the lead in 3 and 4. Alves had battled Cody Thompson for the top spot early in the race, but Thompson spun midway through the event, then retired due to damage from another incident.

“I had to make a few adjustments from my driving style from last night,” said Lee, who finished runner-up to Alves Thursday night. “I was a little free and we snugged it up. A huge thanks to XR, man, this track was phenomenal to race on and smooth as glass.”

Eddie Belec and Marvin Mueller won the Modified B Mains.

The inaugural Workin’ Man Nationals will continue with the third and final Race Night on Saturday with the same exact show featuring Modifieds, Sport Mods and Stock Cars. Event and ticket info can be found at www.lasvegasdirttrack.com.