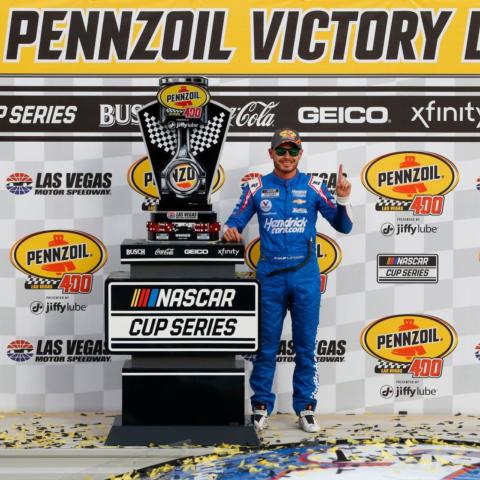 Kyle Larson led the NASCAR Cup Series (NCS) field six times for a total of 103 laps during Sunday’s Pennzoil 400 presented by Jiffy Lube at Las Vegas Motor Speedway (LVMS), cashing in his first win of the 2021 season for a spot in the playoffs.

“It feels good,” said Larson, driver of the No. 5 Chevrolet for Hendrick Motorsports. “I didn’t know if I’d have the opportunity to win a NASCAR race again, and then to get this opportunity and for Mr. Hendrick to take a chance on me means a lot.”

Larson dominated the majority of the 267-lap race, led the most laps and took the stage two win, but the battle was not easily won, as 12 drivers exchanged the lead 27 times throughout the afternoon.

“It’s been quite a journey for this team and even for Kyle,” said Daniels. “Kyle coming on board has been a nice spark for this team, because [last year] was tough on our team. To end without getting that win was bittersweet, but we were quickly able to turn the page.”

“My wife and I were watching, and it was emotional and it was joy, just so many things,” said Hendrick. “I love those colors. When we were going to be on the car, I wanted to run those colors with that number. It meant so much to my family to honor our son. Kyle made us proud today.”

Stage one winner Brad Keselowski finished second, but was the first to congratulate Larson on the start/finish line.

“I’m just really happy for him and happy to see him bounce back,” said Keselowski. “Everyone loves a good redemption story. I told him I wanted to win the race, but if I couldn’t, I wanted him to. We’ve all been pulling for him.”