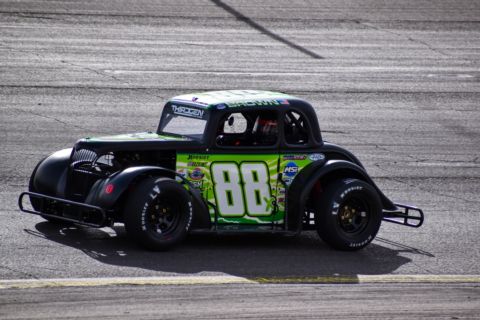 The nation’s best USLCI Legend Car drivers invaded the Bullring at Las Vegas Motor Speedway for three days this weekend, but, when the dust settled at the fast 3/8-mile paved oval, it was the local drivers showing the visitors the way to the checkered flag.

Drivers from 26 states and Canada converged on the Sin City short track in an effort to win the National crown as well as the coveted national point championships. Some of the most competitive racing seen all season at the Bullring made for spectacular wheel-to-wheel action and some hurt feelings in the pits. But the on-track competition proved why these racers were battling for the national titles.

It was local veteran racer Giannini of Henderson, NV, who had been working on his new No. 25 mount throughout the season with only a few appearances in the Star Nursery Series this year at the Bullring. But Giannini made his presence known immediately with the fastest qualifying time and started from the pole in the 35-lap Pro Class national final.

Throughout the main event, it looked like Levie Jones of Puyallup, WA, was the driver to beat after he piloted his No. 92 machine to the front on lap four from his fourth starting position. Jones held off Giannini, Josh Hicks of McDonough, GA, Bullring Legends series champion Jordan Holloway also of Henderson, Cody Hall of Griffin, GA and Parker Stephens of Tumwater, WA for some 25 circuits despite fighting off challenges after caution period.

Hick jumped to the lead after the restart on lap 30 and looked to be headed to the national title before Giannini slid under the Georgia competitor with a green-white-checkered restart. At the checkered flag, it was Giannini besting Jones by 0.094 seconds followed by Hicks, Hall, coming from 21st, Stephens and Holloway.

The sixth-place finish by Holloway secured the USLCI Legend Cars national point title for the Utah Tech University freshman who captured seven of ten Bullring features this year. Jensen Jorgensen of Stockbridge, GA, was the national point leader entering Saturday’s final but was knocked out of competition on lap six and finished 24th.

“It’s a great feeling to win the national championship in the Legends,” said Holloway after the race. “My car was very good on short runs but not on the longer runs. We didn’t have the rubber from the big cars (Modifieds and Late Models) that we normally have at the Bullring. So, the track was different this weekend and it was cooler temperatures too. I was able to move up in the race in the top three, but then settled in to collect the points for the title. We ran sticker tires for the first time this year and they were different from the used ones. We drove the track a little different then this weekend. But it’s big to win the national points.”

Giannini said he wasn’t sure if they had the right setup for the weekend after little running with the car during the season. But the setup was outstanding throughout the weekend.

“I can’t believe it because that was the hardest, I have ever driven in my life,” said Giannini. “I don’t think we had the best setup today. I thought the 92 (Jones) and 4 (Hicks) had the better setups for the long runs. Those late cautions and red flag helped cool my tires down enough to get the job done. I have to say thank you to Peyton Saxton, my brother Gary for building this hot rod, my dad and my wife and kids and the Third Generation Racing crew. It’s like a dream come true.

“We didn’t race at the Bullring much this year, maybe three or four times. We shook her down and the car wasn’t great. We threw a different setup at it, and it stuck. It was the right move.”

Brown, the 17-year-old high school senior from Las Vegas, entered the Saturday 35-lap Semi-Pro feature just six points out of the national point lead and knew he needed a victory for a chance at the national title. Cody, starting 18th in the 27-driver field, had his work cut out for him.

At the drop of the green flag, pole winner Jacob Staten of Midlothian, TX, jumped to the advantage and fought off challenges from Carson Brown of Moseley, VA, Jarrett Wagman of Titusville, FL, Jadan Bowling of Holden Beach, NC, Dawson Sutton of Lebanon, TN, and T.J. Roberts of Queen Creek, AZ. By lap eight, Brown had driven to the fourth spot and was charging towards the front.

At lap 13, Brown passed Bowling and Staten for the lead and the battle with Bowling was intense. They swapped the lead numerous times before Brown claimed the top position on lap 26. Despite two caution periods, Cody was able to hold off Staten and Donovan Strauss of Marietta, GA, by 0.702 seconds for the National win as well as taking the Semi-Pro national point crown.

“I was thinking of everything that could happen with the green-white-checkered finish,” said Brown. “And knowing that there were so many good drivers right behind me made it worse. And this win makes it feel ten times better with the national event. I don’t want to sound cocky, but this is my home track and I wanted to win it for all of our local guys who race here all season. I was definitely looking at scoring points today for the championship. But, as I got into the top five in the race, I thought, ‘I just go for the win now.’ You know everything in Vegas is better, so I guess we’ll have a party tonight.”

In the 35-lap Young Lion main event, young star Joel Smith, a 12-year-old from Mooresville, NC, started on the outside of the front row and battled hard with T.J. DeCaire of Land O Lakes, FL, George Phillips of Charlotte, NC, and Lanie Buice of Locust Grove, GA throughout the event.

By lap 25, Smith held the margin with his No. 24S machine and captured the national championship with a 0.907-second victory over Gianni Esposito of Dacula, GA followed by Josh Dickens of Miami, FL, Buice and DeCaire. Placing sixth through tenth were Kyle Lang of Snohomish, WA; Jackson Reynolds of Marietta, GA; Phillips; Isaiah Newcomb of Plymouth, MA and Gavin Ray of Las Vegas.

“Wow, I can’t believe I just did that,” said Smith. “I have no idea how win that one. I was watching more mirror and hitting my marks. Then make sure I didn’t make any mistakes at all. It’s my biggest win ever and I have to thank Darren Amidon, Amidon Motorsports, Elite Performance Industries, my parents and everyone who helped me. Let’s go!”

The 35-lap Masters’ feature was a wild one and the winner wasn’t in front until the final corner of the final lap when Lee Jordan drove his No. 81 car past the two leaders who collided. Jordan, the veteran from Rock Hill, SC, started third and ran in the top-five throughout the main event and ran fourth at the white flag.

Tim Brockhouse of Shakeopee, MN, took the last lap flag with Robbie Woodall of McDonough, GA, right on his rear bumper. But both drivers battled side-by-side in turn four, made contact and slid wide and Jordan drove by and took the checked flag.

The 20-lap USLCI Bandoleros Bandits West final also went down the final laps with Darren Krantz Jr. of Huntington, NY, taking the 0.947-second win over Jarrett Dickson of Redwood City, CA, but it wasn’t easy. Krantz dominated the early portions of the event before a charging Wyatt Coffery of Waynesboro, VA, and Billy Lee of Ruskin FL got the mix by lap 13. Coffey took the advantage and Lee challenged Krantz. With two laps remaining, Coffey and Lee got together in turn four and Krantz was able to collect the victory.

Young Neal Dulin of Harrisburg, NC, continued his 2022 winning ways in the USLCI Bandoleros Outlaw Division with a strong 2.112-second win in his No. 79 car to capture the Bandoleros West championship 20-lapper over Emma Teal of Monticello, GA, and Daniel O’Donnell of Oak Hills, CA. Round out the top-five were Emma Britt of Hampton, GA, and Madilyn Lange of Wheatland, WY.

NEXT RACE: The annual Star Nursery Classic Open Comp night will conclude the 2022 Bullring season on Friday and Saturday, Dec. 2-3, with a stellar field of drivers competing in the lightning-fast Super Modifieds, Modifieds, Pro Late Models, Super Late Models and Junior Late Models. Gates will open at 5 p.m. with opening ceremonies taking place at 6:45 p.m. Tickets are $10 for adults. Children 12 and under will be admitted free with a ticketed adult through the 2022 Bullring season. Tickets may be purchased in advance by visiting or calling the LVMS ticket office at 800-644-4444 or online at LVMS.com. For stockyard passes, please call 800-644-4444, Monday-Friday, 9 a.m.-5 p.m. PST.