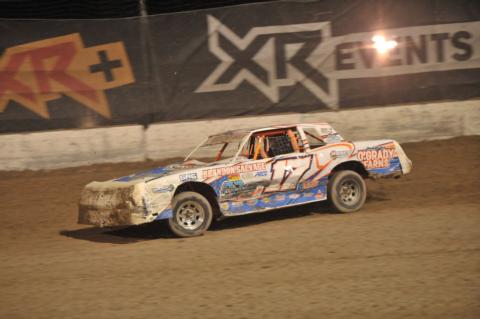 For the full Saturday night rundown of results, click HERE.

All week, Ramsey (Bedford, Iowa) was the class of the Hobby Stock field, dominating his heat races and features, but on Saturday, Solomon Bennett gave him a true run for his money in the 15-lap, $750-to-win main event. Bennett ran even with Ramsey’s No. 17 throughout the middle portion of the event – hugging the bottom as Ramsey used the cushion. The two raced door-to-door and battled three-wide on the bottom of the lapped car of Reven Bitting with five laps to go. Bennett nearly cleared Ramsey several times, but Ramsey hung tough, eventually pulling ahead for the lead and driving away for the victory.

“We like half-miles,” Ramsey said in Victory Lane. “We had a great track, great surface, and we had it dialed in. I think we had a satisfactory weekend.”

Satisfactory is an understatement.

Brian Ruhlman (Clarklake, Mich.) ran off with the 18-lap, $5,000-to-win Open Modified main event, leading from the onset and never truly being challenged. Friday night’s winner Kollin Hibdon drove from mid-pack to second but that’s all the farther he got. Ruhlman led by nearly a straightaway at one point, and nailed two late-race restarts to complete the dominating victory.

Ruhlman’s No. 49 Mod ran under the UMP rule set this week as the unique Open Modified rules allowed for USMTS/USRA, UMP, IMCA-type or WISSOTA rule sets to be used.

Dalton Hatten (Craig, Colo.) bounced back and put it on the field in the 15-lap, $750-to-win Dwarf Car feature. Hatten prevailed after battling through the early part of the race with David Teves, Ridge Abbott and Dylan Budnik. Hatten and Friday night’s winner Abbott broke away from the pack, and after a late caution, Teves took second from Abbott but couldn’t catch Hatten.

It was Hatten’s second win in three nights at the Las Vegas Dirt Nationals. His No. 63D prevailed on Thursday but wrecked on Friday night on the first lap of the feature.

“We’re feeling pretty good,” Hatten said. “I was pretty upset with myself after wrecking on Friday. I feel like I could’ve taken all three nights. I’ve got a helluva crew. It was a lot of fun. We’ll definitely be back next year.”

Ryan Doglione looked to have the West Coast Sport Compact feature in the bag, but with two laps to go, he got his car out of shape and relinquished a more-than-2.5-second lead. Scott Beaudoin’s No. 98 and Greg Baronian slipped by on the bottom, and Beaudoin (Coos Bay, Ore.) held the two off for his second victory in three nights. Doglione had led the feature from the onset, but the one mistake was his undoing.

“This car was wicked fast. We had so much fun here,” Beaudoin said. “Thanks to the XR crew for putting this on. It was a blast.”

In Night 2’s delayed $2,500-to-win Bandits Outlaw Sprint Series feature, Garet Williamson (Columbia, Mo.) slid his way to victory. Chase Randall was running away with the race, having led every lap of the 18-lap main event from the pole, but with two circuits to go, Randall’s right rear came apart, causing a yellow. Garen Linder inherited the lead with Joel Myers Jr. and Williamson in tow. On the break, Williamson snagged second, then threw a massive slide job into Turn 3 coming to the white flag. It stuck, and Williamson’s No. 24 drove away for the win.

Linder finished second, Myers – who started in the rear due to a pre-race tire change – finished third, Wes Wofford in fourth and Jeremy McCune fifth. Randall was credited with eighth place.

In Saturday night’s $5,000-to-win, 18-lap main event, Linder used a perfect final restart to cap off his Las Vegas Dirt Nationals with a Bandits Outlaw Sprint Series victory. Linder (Central Point, Ore.) lost the lead to a hard-charging Joel Myers Jr., but as Myers had set sail, the field was brought back together as the caution flew with four laps to go. Linder nailed the gas in his No. 22 sprint car and tore around the inside of Myers to get the lead, and ultimately, the win. Myers had taken the lead from Linder four laps before the final caution.

Saturday’s action also had unique extra incentive. The highest-finishing racer in each class who towed their car to the event on an open trailer received double their finishing payout. Billy Kalogeras (8th in Dwarf Cars), Baronian (2nd in West Coast Sport Compacts) and Watson (4th in Hobby Stocks) all earned the Open Trailer Bonus.

The next event at the Dirt Track at Las Vegas Motor Speedway will be the inaugural Workin’ Man Nationals February 9-12, 2022 featuring Modifieds, Sport Mods and Stock Cars. Tickets and event info can be found at www.lasvegasdirttrack.com.