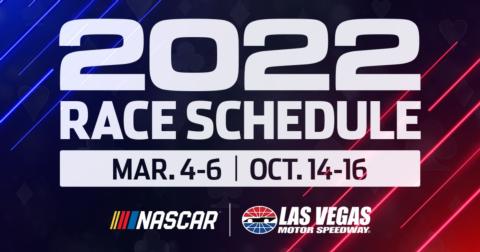 Change (and cooler temperatures) will be in the air when NASCAR’s Cup Series returns to Las Vegas Motor Speedway in 2022.

LVMS will host the Pennzoil 400 presented by Jiffy Lube, the debut race of NASCAR’s Next Gen car on a 1.5-mile superspeedway, on March 6. The speedway’s annual fall date, the South Point 400, will be Oct. 16 — three weeks later than past years. The South Point 400 also will be the first race of the final round of the NASCAR Playoffs.

“We’re beyond excited to have these two specific dates next year,” said LVMS President Chris Powell. “We really appreciate everyone who had a hand in moving our playoff event back three weeks. Our fans have clamored for a cooler race date since we were awarded a playoff race. Anyone who has ever been to Las Vegas in October knows it’s one of the most beautiful months of the year here.

“And the Next Gen car has been several years in the making. Knowing the importance of 1.5-mile superspeedways to the season championship, we have great anticipation of seeing the new car on our speedway.”

Companion events, qualifying, practice and start times will all be announced at a later date. Season, weekend and individual race tickets are on sale now at LVMS.com.