Nemechek holds off Busch to win the Bucked Up 200 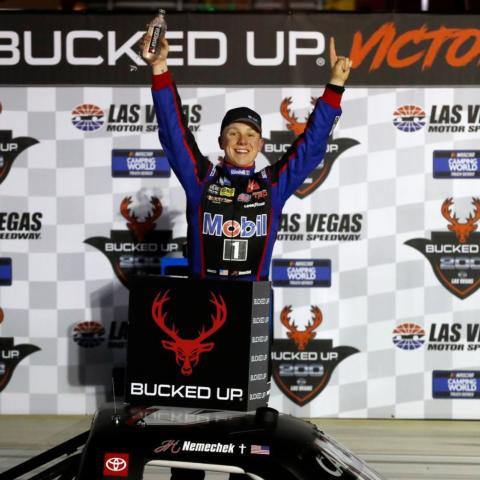 NASCAR fans returned to Las Vegas Motor Speedway (LVMS) for the first time since the onset of the COVID-19 pandemic to witness a caution-filled NASCAR Camping World Truck Series (NCWTS) race that ended with Kyle Busch Motorsports finishing one-two. John Hunter Nemechek led the most laps in Friday’s Bucked Up 200, beating his team owner Kyle Busch to the checkers by 0.686 seconds.

“We started this season with the hashtag ‘Here For Wins,’ and we were able to get it done tonight,” said Nemechek, driver of the No. 4 Toyota Tundra. “I was holding back emotion after getting out of the truck. It’s so rewarding to make that decision [to move from the Cup Series to the Truck Series] and have it pay off. For us to be able to come out here and win on our third week as a team is very validating.”

Las Vegas native Busch started the race 27th, drove through the field to the top five before the end of stage one, but then went a lap down with 46 to go after suffering a flat left rear. Another caution in lap 97 allowed Busch to regain his position on the lead lap and once again drive through the field to ultimately battle Nemechek for the win but end the night in the runner up position.

“It’s pretty cool to come home one-two,” said Busch, driver of the No. 51 Toyota Tundra. “It’s perfect. It’s all you can ask for. They’ve been contenders each and every week, and it’s refreshing and cool to see another driver run up front with our equipment.”

Nemechek said he looks up to his team owner for advice and opportunities to grow.

“It’s amazing to see the growth and development that I feel like I have been able to overcome through the years of racing,” said Nemechek. “I haven’t won in two years and that takes a toll on you as a driver. [Busch] is a great mentor, boss and someone I feel like I can call a friend, and it’s been amazing to see the process for myself learning a lot of things that I wasn’t quite aware of.”

This win not only marked Nemechek’s seventh career NCWTS win, but also marked the first time a father/son duo has won national series races at LVMS after his father, Joe Nemechek, earned a NASCAR Xfinity Series win in 2003.

Austin Hill, who won the last NCWTS race at LVMS in September, finished third after a strong run all night.

“Our number one goal coming into the night was to win the race, and we fell short,” said Hill, driver of the No. 16 Toyota Tundra. “It’s good to get back on the right foot, but you always want more if you’re not coming home with the trophy. I’m more than ready to get to Atlanta.”

Stewart Friesen and Matt Crafton rounded out the top five.

The action continues Saturday as the NASCAR Xfinity Series takes on LVMS for the Alsco Uniforms 300 at 1 p.m. on FS1 and wraps up Sunday with the NASCAR Cup Series drivers battling to win the Pennzoil 400 presented by Jiffy Lube on FOX at 12:30 p.m. For up-to-date race weekend information, visit the speedway’s Virtual Fan Garage. To secure tickets and RV camping for the South Point 400 NASCAR playoff weekend, Sept. 24-26, visit LVMS.com.