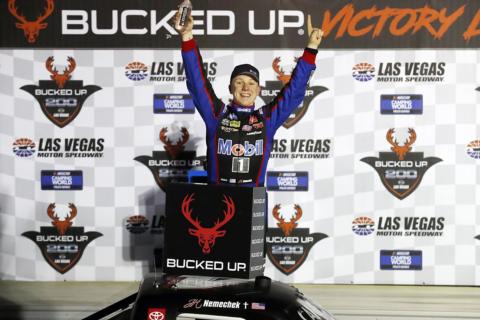 In order to reign triumphant at the diamond in the desert, though, the field must find a way to beat John Hunter Nemechek.

Nemechek, the driver of the No. 4 Toyota Tundra for Kyle Busch Motorsports, is the Truck Series’ defending winner at LVMS – and the polesitter for today’s race, which gets underway at 6 p.m.

Nemechek won the Bucked Up 200 in March, one of five victories the 24-year-old has amassed in building a 24-point lead in series standings entering the Playoffs’ Round of 8.

He’s far from the only driver capable of hoisting the trophy, however.

Defending series champion Sheldon Creed, a native of Alpine, Calif., has three wins on the season. The accomplished off-road racer scored an ARCA Menards Series West triumph at the LVMS Dirt Track in 2018, but a win today would mark Creed’s first on the 1.5-mile superspeedway. He starts ninth.

The second night of an action-packed South Point 400 NASCAR weekend at Las Vegas Motor Speedway features tickets starting at just $24. Tickets are available by calling 702.644.4444 or online at LVMS.com, and children (ages 12 and under) get in free with a ticketed adult.