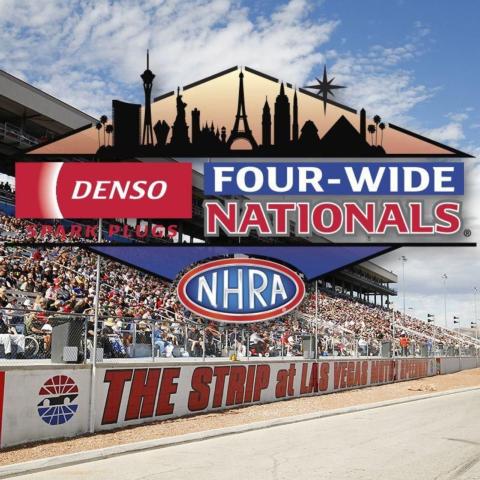 It isn’t a stretch to say not many people are looking forward to the return of this weekend’s DENSO Spark Plugs NHRA Four-Wide Nationals at The Strip at Las Vegas Motor Speedway more than former Funny Car world champ J.R. Todd.

The NHRA Camping World Drag Racing Series star won the first two four-wide events in Las Vegas, including the most recent one in 2019 in his 11,000-horsepower DHL Toyota Camry. Todd has performed well in Vegas, as has the Kalitta Motorsports team and that has continued in the unique and spectacular four-wide setup. After the race didn’t take place a year ago due to the COVID-19 pandemic, Todd is ready for more four-wide success in Las Vegas, especially after winning the opening race of the 2021 NHRA Camping World Drag Racing Series season.

“We’re hoping we can keep riding that wave,” Todd said. “Hopefully we can get back there and have another good weekend, and we’re looking forward to it. Having that much time away from a four-wide race, I’m sure everyone is going to be extra cautious in Q1, but it will be routine after that. We’ll just try to go up there and hit the gas on time.”

This year’s race will be televised on FOX Sports 1, including finals coverage starting at 8 p.m. (ET) on Sunday, April 18. It is the second race of the 2021 season and the excitement is high for one of the biggest spectacles in the sport. All grandstand tickets have been sold for the weekend, as state and local officials allowed the track to host fans at 50-percent capacity for the race in Las Vegas.

Todd impressed at Gainesville and after going winless in 2020, he can start in commanding fashion with a strong performance in Las Vegas. He’ll have to get by the likes of defending world champ Matt Hagan, Robert Hight, John Force, Ron Capps and Cruz Pedregon, but crew chiefs Jon Oberhofer and Todd Smith have always delivered a strong car in Vegas for Todd.

“Todd and Jon O always have a good handle on the track whether it’s two-wide or four-wide, so that gives you confidence,” Todd said. “It was nice to start the year fresh in the winner’s circle, and we just want to keep it going.”

Top Fuel’s Antron Brown hasn’t tasted four-wide success in Las Vegas, but he did win at the track last fall to close out a resurgent 2020 season. That momentum continued with a solid outing in Gainesville, and Brown has plenty of overall four-wide success thanks to two wins in Charlotte. He’ll have to take on top names like defending world champ Steve Torrence, Doug Kalitta and Brittany Force, but a four-wide event always gets Brown and his Don Schumacher Racing team excited to race his 11,000-horsepower Matco Tools/Sirius XM/Toyota dragster.

“I’m super pumped about going to Vegas and racing four-wide.” Brown said. “It feels great to kick off our West Coast opener in Vegas since the last time we raced there, we finished our weekend in the winner’s circle, and we want to continue that trend out there this weekend. We know it’s going to be controlled chaos with it being a four-wide event, but our Matco Tools Toyota with the support of Sirius XM, Global Electronic Technology, and Hangsterfer’s, is ready to roll. Our whole team is really excited and I’m looking forward to getting out there.”

Greg Anderson is certainly among the favorites in Pro Stock, advancing to the final quad of the 2019 race. He also has momentum after winning in Gainesville to earn his 95th career win and will face off with the likes of Erica Enders, who won in Vegas to close out the 2020 season, Troy Coughlin Jr., Kyle Koretsky, Deric Kramer and Mason McGaha.

Pro Stock Motorcycle took part in four-wide racing at Las Vegas for the first time in 2019, with Hector Arana Jr. earning the victory. Others to watch in the two-wheeled class include defending champ Matt Smith, who won in Gainesville to open 2021, Angie Smith, three-time world champ Angelle Sampey and Jerry Savoie.

The race also includes thrilling competition in the NHRA Lucas Oil Drag Racing Series, where future stars of the sport hone their skills. The drivers in Top Alcohol Dragster and Top Alcohol Funny Car will also race in a four-wide format for the first time in class history. After qualifying on both days, fans can watch a thrilling four-wide jet car exhibition featuring the Lucas Oil “Muy Caliente” jets, the “Iceman” jet dragster and the “Volcano” jet dragster. Jet cars are thrust-driven propelled by jet engines with exciting pre-run flame shows.