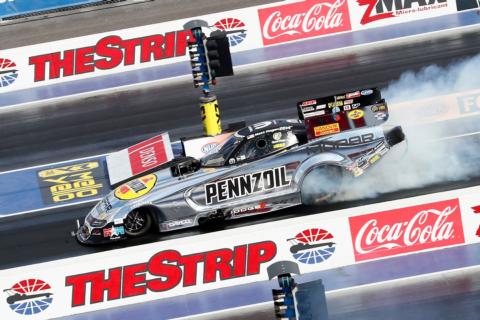 Top Fuel, Funny Car, Pro Stock and Pro Stock Motorcycle will take center stage at the world finals with two rounds of qualifying on Saturday followed by final eliminations and the crowning of champions on Sunday.

Don Schumacher Racing’s Matt Hagan, a two-time world champion and defending event winner, is the current Funny Car points leader, while teammate Tommy Johnson Jr. closed the gap to 42 points with his victory last weekend in Houston. DSR’s Jack Beckman is only 43 points behind Hagan, creating what will be an excitement-filled weekend in the class.

Steve Torrence, driver of the 11,000-horsepower Capco Contractors dragster, is in the top position in Top Fuel, as the two-time defending champion holds a commanding lead closing in on a third straight world title. He currently has a 101-point advantage over veteran Doug Kalitta, who is seeking his first world championship. Kalitta finished second to Torrence by a handful of points a year ago, but beating Torrence in crunch time has proven to be a difficult task.

“This weekend in Vegas is a huge weekend for our team,” Torrence said. “We have an opportunity to lock up our third championship in three years and we just need to continue what we’ve been doing all season.”

The Pro Stock world championship will come down to the wire between defending race winner Erica Enders, Jason Line and Jeg Coughlin Jr., who have a combined 11 world championships between them. Enders is the defending champion and a fourth world title would give her more championships than any female in NHRA history, and the standout currently leads Line and Coughlin, who are both retiring from the class following the season, by 55 points.

In Pro Stock Motorcycle, defending event winner Matt Smith is the favorite to claim his fourth world championship on his Denso/Stockseth/MSR EBR. He’s been dominant in qualifying, picking up four straight No. 1 qualifiers as well as two wins in that span, but Smith knows he has to finish strong against a number of standout competitors making a late-season charge. Teammate Scotty Pollacheck and Eddie Krawiec, who won in Houston to claim his first victory in more than two years, are currently 78 points behind Smith in the standings.

The sold-out event marks the last of 11 races during the 2020 NHRA Camping World Drag Racing Series and the first major professional sports event to be conducted in Nevada with spectators in attendance since mass gatherings were suspended at the onset of the Covid-19 pandemic in March.