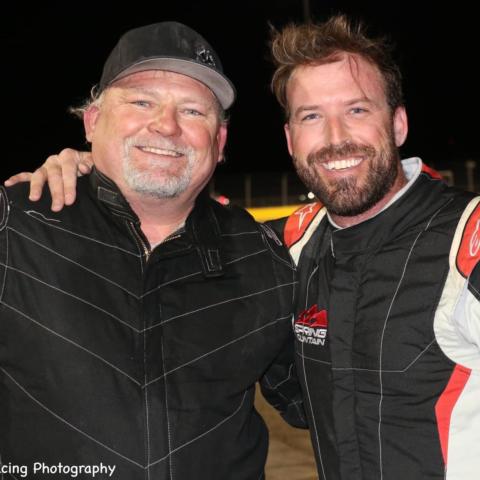 After a 13-month layoff due to the COVID-19 Pandemic, the roar of short-track racing returned Saturday night to the The Bullring at Las Vegas Motor Speedway with veteran Jeffrey Peterson of San Bernardino, Calif., driving to two NASCAR feature wins in the 37th season opener for the delighted crowd.  Prior to Saturday night’s opener, the last competition at the 3/8-mile oval was held on March 7, 2020.

Peterson, driving to the pole position in both the Pro Late Models and Super Late Models qualifying rounds, put in an impressive performance in the 35-lap flag-to-flag Sigma Performance Series Pro Late Model main event in his No. 61 Tri-City Towing machine. Peterson led every lap in the all-green flag feature and defeated Tanner Reif by 1.659 seconds at the checkered flag. Third place went to Cody Kiemele followed by Jaron Giannini and Mike Weimann.

Peterson dedicated his victory to the late Steve Rzesnowiecky, the longtime local racer and race engine builder who recently passed away.

“The Pro Late Model class is a great way to go for the budgets,” said Peterson, the 2019 Orange Show Speedway Late Model series champion. “It started at Madera Speedway in California with the rule package and using the treaded tires (eight inches wide). The tire deal is a real cost saver for many teams. You can run Hoosier treaded tires multiple times where that isn’t the case with the slicks in other Late Models. I think the Pro Late Models are the way of the future. We can run a number of different tracks with this setup too.

“I really want to thank the race fans for coming back to The Bullring. And T.J. Clark and the LVMS staff for getting the Bullring program back up and running this year after the pandemic. It’s great to be back racing again!”

The wildest action of the night was found in the 40-lap NASCAR 602 Mojave Construction Modified showcase event with a sensational nose-to-tail battle for the lead and some on-track incidents back in the 17-car field.

At the drop of the green flag, multi-time Modified series champion Doug Hamm, the polesitter, jumped to the lead over Sam Jacks and Eric Rhead. However, several caution flags flew early before the field could settle in for a strong contest. It was local favorite Justin Johnson of Las Vegas who made the bold move from fourth to second to challenge Hamm immediately for the lead.

Johnson, who came from Bandoleros to Legends to Trucks to Late Models and now Modifieds during his career at the Bullring, pressured Hamm for some 20 laps before making the inside move in turn three on lap 26. The instructor at the Ron Fellows Performance Driving School in Pahrump guided his No. 17 to the inside of Hamm’s No. 4X and grabbed the advantage with 14 circuits remaining. Hamm attempted to take back the lead, but the 35-year-old racing veteran pulled away to win by 2.57 seconds at the finish.

“It feels great to be back at The Bullring after the long layoff,” said Johnson. “We had a good battle with Doug for many laps before I was able to get inside of him. It’s always fun to win the opening race.”

Another local favorite, Matt Jaskol of Las Vegas, returned to The Bullring action in the Late Model Truck division Saturday night after a recent NASCAR Xfinity Series showing at Martinsville, Va., where he placed 28th for MBM Motorsports.

The former karting champion started in the last row in his No. 9 pickup in the 30-lap truck main event and quickly moved to second by lap five. He then ran down early leader polesitter Mark Allison and stalked Allison some 20 laps before making the inside pass in turn two on lap 25. Jaskol won the truck feature by 0.778 second over Allison with third going to Mullis.

“It’s our first Bullring race in over a year and I want to thank the fans for coming back out here,” said Jaskol. “It’s been a rough year for so many. I want to thank Chris Davenport and Auto Parts for Plus and Las Vegas.net and many others. These people have been in my life for a long time. Tonight, my family came out and this win is special.”

In the 25-lap NASCAR Bomber main, Court Connell, a longtime Las Vegas racer, returned to a familiar Bullring spot – victory lane – with a close 0.627 second win over Adam Simon and Carl Duryee. Connell, a veteran Bomber competitor, took the top spot by lap three and opened his margin to several seconds with five laps remaining before Simon made a late-race charge at the checkered flag.

“I went back to my old car for this race,” said Connell. “I passed the car down the line a couple of times and now it is back with me. It’s been a long time since I was in the winner’s circle. I feel very happy to be back at The Bullring again. The fans are everything to us. We are here to put a show on for the fans. Please bring some more friends for the next race.”

Some of the best wheel-to-wheel racing Saturday night was in the USLCI Legends main with young talented drivers looking to become sport’s future stars. Three-wide racing was common early in the 20-lap feature before 13-year-old Tyler Reif took control on lap five and drove to victory over former Late Model champion Branden Giannini, Cody Brown and Jordan Holloway. Brown put in a tremendous drive from last on the starting grid to make the podium (top-three).

“My team told me to get to the front early since we didn’t know how much time would be left in the race,” said Reif, who had a 1.239-second victory. “I had planned to pass Branden late so he couldn’t get back by me. But I decided to get him early. It’s nice to see the fans back at the track.”

NEXT RACE: The Bullring at Las Vegas Motor Speedway returns to short track action on Saturday, May 8, with the second round of the 2021 ten-race series featuring all of the regular divisions beginning at 7 p.m. Gates will open at 5:30 p.m. with qualifying set for 5:40 p.m. Opening ceremonies will take place at 6:45 p.m. Children 12 and under will be admitted free with a ticketed adult through the 2021 Bullring season. Tickets may be purchased in advance by visiting or calling the LVMS ticket office at 800-644-4444 or online at LVMS.com.