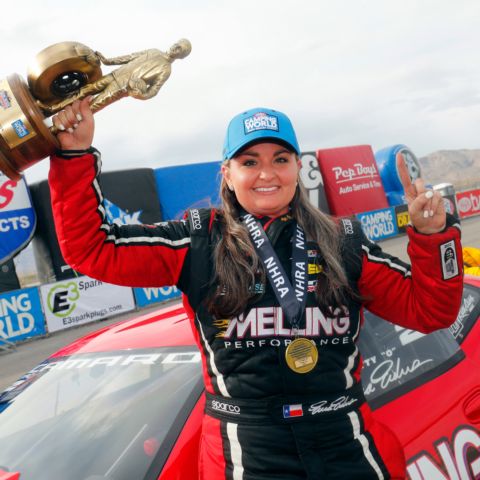 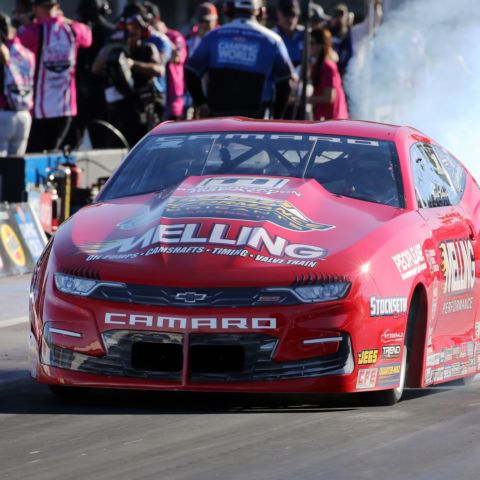 A dominant, magical season has the chance to become a championship year for Erica Enders at this weekend’s 22nd NHRA Nevada Nationals at The Strip at Las Vegas Motor Speedway, which also shows just how incredible the Pro Stock star has been during the 2022 NHRA Camping World Drag Racing Series season.

With another strong showing – which has become the norm for her over the years in Las Vegas – Enders would clinch her fifth world title a race before the finale, a clear indicator she has been nearly unstoppable in her Melling Performance/Elite Motorsports Chevrolet Camaro.

Enders has picked up nine wins this year, tying her career-best for a single season, with two races remaining and she currently holds a 165-point lead over teammate Aaron Stanfield. She also won the spring race in Las Vegas and has a chance to pick up her 10th career victory at The Strip at Las Vegas Motor Speedway, which would extend her mark as the winningest professional driver in track history.

It all adds up to a remarkable weekend of opportunity for Enders, and she’s eager to try to take advantage and close the deal in impressive fashion.

“I’ve definitely always been big on the positive mental attitude part of it, speaking things that you want into existence and visualizing the positive things you want,” said Enders, who now has 42 career wins. “The guys at Elite Motorsports have my back and it’s a pretty awesome environment to work in. It’s a whole lot of fun and I want to go to Vegas and capitalize there. It would be awesome to lock it up. I don’t want to let up and I just want to keep going to battle.”

Steve Torrence (Top Fuel), Cruz Pedregon (Funny Car), Dallas Glenn (Pro Stock) and Steve Johnson (Pro Stock Motorcycle) won last year’s playoff race, which was also NHRA’s 1,000th overall event. This season’s event will be broadcast on Fox Sports 1 (FS1), including eliminations at 5 p.m. on Sunday, Oct. 30 and is the 21st race of the 2022 season and the fifth of sixth events in the Countdown to the Championship.

Enders has been a step ahead of a loaded Pro Stock class all year, both in the regular season and especially during the Countdown to the Championship. She’s already won three of the four playoff races and was nearly perfect at the most recent race in Dallas, recording the quickest run of every qualifying session and every round of eliminations.

She’s continued to praise the work of her Elite Motorsports team, which has matched her step for step in terms of performance during this outstanding year. But Enders knows there’s still work to be done in Las Vegas, especially going against the likes of defending world champ Greg Anderson, Stanfield, Dallas Glenn, Kyle Koretsky, rookie Camrie Caruso and Troy Coughlin Jr. There's also major goals remaining for Enders and there’s not many places where she’s been better than Las Vegas.

“This season has definitely been a dream come true,” Enders said. “We’re headed to Vegas and that track has always been a hugely successful one for us. We’ve won nine races there and we’re hopeful we can try to get a 10th (this weekend). A personal goal coming into the year was to beat the most wins I’ve had in a season. We had nine in 2015 and (the win in Dallas) gave us nine, so we’ve got two races remaining to try and accomplish that goal. It’s just been a tremendous season.”

In Pro Stock Motorcycle, Steve Johnson would like nothing more than a repeat victory and it would come at a pivotal. Last year, Johnson picked up a key late-season win at NHRA’s 1,000th race, staying in the championship mix until the finale in Pomona. He’s picked up two victories this year, enjoying the points lead early in the season, but the veteran is now 118 points back of rival and leader Matt Smith.

That puts Johnson, who is fourth in points behind also Joey Gladstone and Jerry Savoie, in must-win territory. He hasn’t picked up a victory since April and this weekend would be an ideal time to fix that with the world title still up for grabs. Gladstone trails Smith, who is seeking his sixth world championship, by 51 points, while Savoie is 103 points back heading to Las Vegas. Others to watch include Angie Smith, Angelle Sampey and Eddie Krawiec, as each remains in the title chase.

Robert Hight’s lead in Funny Car is only 10 points over defending world champ Ron Capps heading to Las Vegas, setting up what could be a marquee showdown between the two veterans. Matt Hagan trails Hight by 76 points, while other standouts like John Force, Bob Tasca III, Pedregon and J.R. Todd are searching for a Vegas win.

Before racing starts, fans can head to NHRA FanFest at the Fremont Street Experience from 5:00-7:00 p.m. PT. This free event will feature a huge amount of standout NHRA drivers, with the driver autograph session set to take place from 5:30-6:30 p.m.

The NHRA Nevada Nationals also will feature thrilling competition in the NHRA Lucas Oil Drag Racing Series, which includes some of the sport’s top drivers, and the Summit Racing Series ET Finals, where national champions will be crowned, including the first EV national championship in NHRA history. The weekend will also include action in the thrilling Nostalgia Funny Car class, while fans can watch a spectacular jet dragster exhibition from Team “Muy Caliente and “The Iceman” after nitro qualifying on Friday and Saturday.

Pro Stock School with veteran Matt Hartford takes place on Friday, while fans can attend Nitro School in Antron Brown's pits the next day to learn more about how the cars operate and reach their thrilling speeds. There will also be autograph sessions on Friday at the Toyota Racing Experience with Toyota-sponsored drivers, as well as at NHRA Member Hospitality, which will feature riders in Pro Stock Motorcycle.

Race fans at The Strip at Las Vegas Motor Speedway can enjoy the special pre-race ceremonies that introduce and celebrate each of the drivers racing for the prestigious Wally on Sunday and includes the fan favorite SealMaster Track Walk. The final can’t-miss experience of any NHRA event is the winner’s circle celebration on Sunday after racing concludes, where fans are invited to congratulate the NHRA Nevada Nationals event winners.

As always, fans also get an exclusive pit pass to the most powerful and sensory-filled motorsports attraction on the planet in Las Vegas. This unique opportunity gives fans a unique chance to see teams in action and service their hot rods between rounds, get autographs from their favorite NHRA drivers, and more. Fans can also visit NHRA’s popular Nitro Alley and Manufacturers Midway, where sponsors and race vendors create an exciting atmosphere that includes interactive displays, simulated competitions, merchandise, food, and fun for the entire family. The new Pep Boys midway display includes tire change challenges, oil change challenges, a slot car track, and much more, adding even more excitement to the midway.

To purchase tickets to the NHRA Nevada Nationals at The Strip at Las Vegas Motor Speedway, call 800-644-4444 or visit www.lvms.com. Children 12 and under are admitted free in general admissions areas with a paid adult. For more information about NHRA, visit www.nhra.com