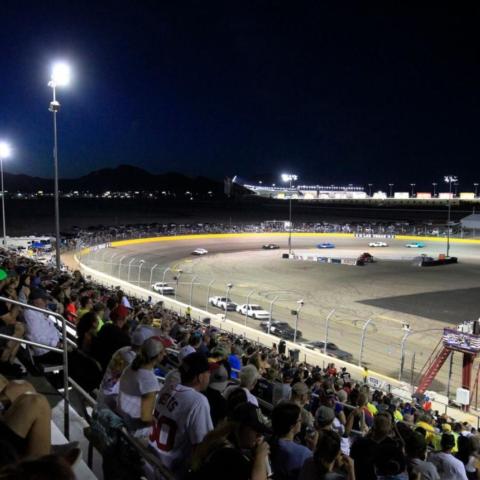 The Bullring at Las Vegas Motor Speedway gets back in action this Saturday after a year-long absence due to the COVID-19 pandemic. The Bullring, in its 37th season (and 21st in its current configuration), is set to resume under the supervision of TJ Clark, a former driver in the NASCAR Camping World Truck Series and previous instructor at the Bob Bondurant Driving School.

The Bullring has produced many great talents, including Kurt and Kyle Busch, Brendan Gaughan, Noah Gragson and Riley Herbst. Clark and his son Spencer raced in the Kyle Busch era, before Spencer lost his life in an automobile accident shortly after his successful NASCAR Busch (now Xfinity) Series debut in Las Vegas in 2006. Clark, who considers the Bullring his “home track”, has spent the past 10 years since Spencer’s passing propelling other young drivers in their racing careers, through the Spencer Clark Driven Foundation. TJ is taking on his new role as Bullring manager to ensure that short-track racing continues and is available to other racing star hopefuls.

Taking the green on the 3/8-mile paved oval will be all NASCAR classes and the USLCI Legends and Bandoleros. This Saturday kicks off a 10-event schedule, with the NASCAR 602 Modifieds anchoring the night with a 40-lap feature. NASCAR Pro Late Models have a 35-lap race on tap for the season-opener, with both the NASCAR Super Late Models and NASCAR Bombers on the slate with 25-lap features.

In addition, the action kicks off for the Late Model Truck Series, a traveling series that will also make three other visits to the LVMS short track over the course of the season. NASCAR Super Stocks will show up for 20 laps and the popular and exciting Skid Plate cars — cars with no rear wheels but drag “skid” plates instead — will slide around for 15 laps.

Gates open at 5 p.m. Pacific Time, immediately starting with Late Model Truck Series Heat races, then NASCAR Pro Late Model qualifying and NASCAR 602 Modified qualifying. Opening ceremonies will take place at 6:45 p.m. This weekend’s event is the first of 10 points races for the track’s 10 major classes and the season continues through championship night on Saturday, Oct. 30, with an Open Show post-season on Nov. 6.

Children 12 and under will be admitted free with a ticketed adult on Saturday and throughout the 2021 Bullring season. Purchase tickets in advance by visiting or calling the LVMS ticket office at 800-644-4444 or online at LVMS.com.

* Schedule is subject to change