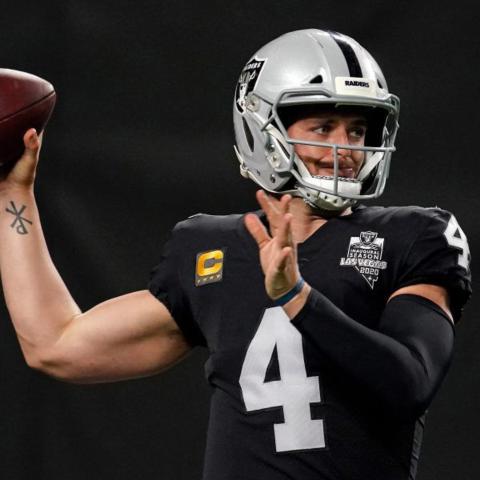 There will be quite the professional sports flair when the commands to start engines are given at Las Vegas Motor Speedway this weekend.

Las Vegas Raiders quarterback Derek Carr headlines the trio as he will deliver the most famous words in motorsports just moments prior to the start of the Pennzoil 400 presented by Jiffy Lube. Carr’s command will top off a weekend that will see Buffalo Bills running back Antonio Williams announce engines for Friday’s Bucked Up 200 NASCAR Camping World Truck Series race and Utah Jazz star forward Joe Ingles deliver the message for Saturday’s Alsco Uniforms 300 NASCAR Xfinity Series race.

“This will be such a thrill to have the chance to bring the NASCAR Cup Series cars to life,” Carr said. “I know there have been a long list on luminaries who have served in this role, and it’s pretty cool to join them. I’m sure it’s going to be exhilarating once those cars fire up.”

Carr just completed his seventh season with the Raiders, where he has amassed 26,896 yards and 170 touchdowns – both all-time bests in Raiders history.

Ingles is in his seventh season with the Jazz, where he has been a key player at both the shooting guard and small forward positions. Williams just completed his rookie season with the AFC runners-up Buffalo Bills, where he scored two touchdowns and rushed for 63 yards in the regular season finale against Miami. Williams also is a member of Joe Graf Jr.’s Xfinity Series team as well.

Sunday’s Pennzoil 400 presented by Jiffy Lube is sold out, but tickets do remain for Saturday’s Alsco Uniforms 300 and Friday’s Bucked Up 200. Go to lvms.com for tickets and RV spaces.