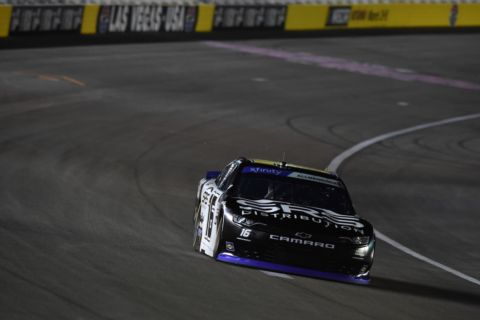 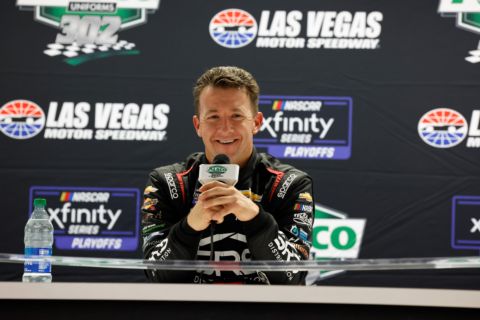 Red-hot A.J. Allmendinger, who has claimed NASCAR Xfinity Series Playoff victories at Talladega and Charlotte’s Roval the last two weeks, will go for his third consecutive victory and sixth of the season Saturday from the pole in the Alsco Uniforms 302.

“I held my breath, glad we didn’t have to do two laps,” Allmendinger said with a grin. “We have some work to do in race trim. We have to go to work tonight and figure out what we have to do. I was hanging on there. Overall it’s great to start up front and the ultimate goal is to go win this race and if not, try to maximize all the points we can get.”

Bayne pushed the Gibbs Racing No. 18 Toyota to the second spot with a 29.729 at 181.641 mph and his teammate Gibbs qualified third in the No. 54 Toyota with a 29.800 at 181.208 mph. Allmendinger feels like his team will need to make a few adjustments to his car so he can keep up with the two Gibbs Racing machines.

“It’s going to be hot and slick tomorrow and we need to get the car connected to both ends of the track,” Allmendinger said. “We will do what we can and make the best of it. Hopefully we can work on it and get a little closer in the ballpark. It looked like the 18 and 54 were quicker in race trim so we have some work to do. This track is going to widen out a lot. It’s trying to find the right balance and comfort level. We are close, but we need to be a little bit better.”

Allmendinger has been on quite a tear in the Xfinity Series Playoffs. After earning the regular season title, he posted playoff wins at Talladega Superspeedway and conquered the demanding Roval last weekend.

“The Roval has always been a good track for us and I’ve wanted to get Talladega for awhile,” Allmendinger said. “What I’ve loved about our team is we are maximizing every weekend. I put it on my shoulders to get the most we can get out of our car every weekend.”

Allmendinger, who also will compete in the Cup Series race on Sunday, the South Point 400, is looking to keep his current Xfinity Series streak going, especially given the success he’s had at LVMS recently. He posted a victory here in the spring of 2021 and also claimed the pole here for the spring race earlier this year.

“Every race is different,” Allmendinger said. “I’m having so much fun with Kaulig Racing. That’s two years in a row that we’ve won five races. I’m just enjoying it. The goal is to make it to Phoenix and win a championship, but if it doesn’t happen, it’s been an incredible year.”

Former Daytona 500 winner Bayne, who is driving the No. 18 Gibbs Xfinity car in a limited schedule this season, is making his eighth start and has posted four top-five finishes.

“Dang it, I really wanted to get that pole,” Bayne said. “Probably what our car needs is to run the top and use that wall as a buffer. We are looking forward to tomorrow’s race.”

NASCAR Camping World Truck Series star Hailie Deegan made her NASCAR Xfinity Series debut today, running among the top 10 cars in practice and then qualifying 20th in her red and white No. 07 Pristine Auction Ford Mustang.

“It was wild, I feel like I’m learning something totally new,” Deegan said. “Just learning the gist of running one of these cars with more power. I have heard that here you are off the throttle a lot in an Xfinity car and to experience that is really cool.”

Riley Herbst, who had a top-five car in practice, took wild slide on his qualifying lap. He wasn’t able to record a time and will start the race in 38th, but did a great driving job to keep his machine off the wall. Herbst’s Stewart-Haas Racing team had a tough trip to Las Vegas as their team transporter was involved in a single vehicle accident along I-40 near Flagstaff, Arizona. Neither of the truck’s occupants were seriously injured in the incident.

To purchase tickets to the Alsco Uniforms 302 please visit the Las Vegas Motor Speedway website or call the LVMS ticket sales center at 800-644-4444.