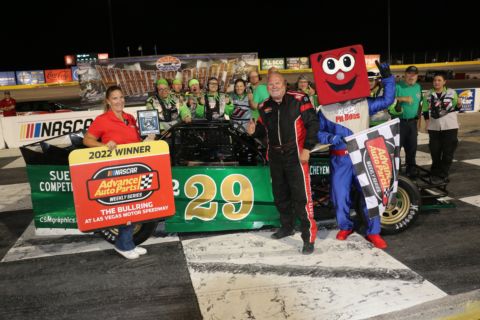 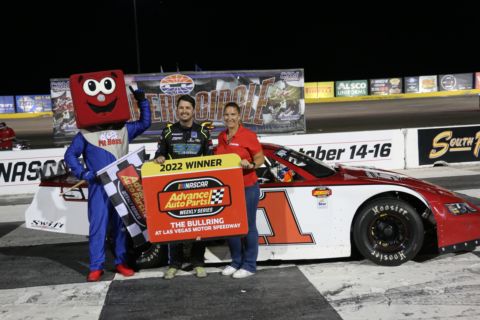 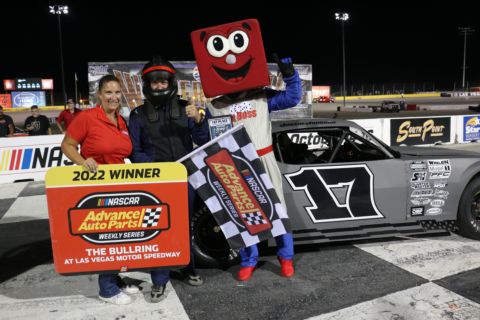 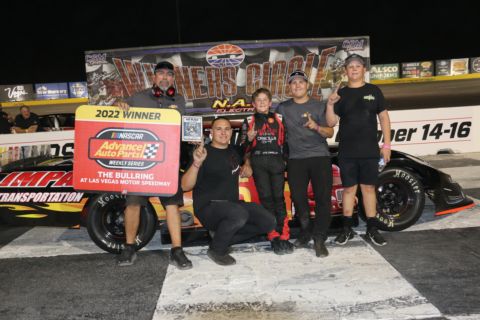 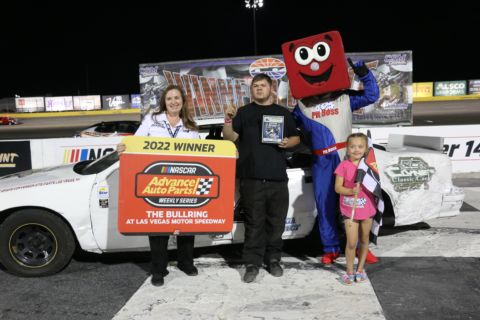 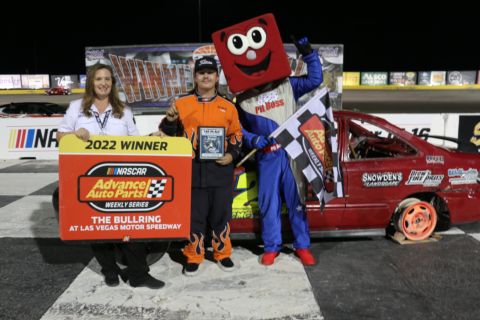 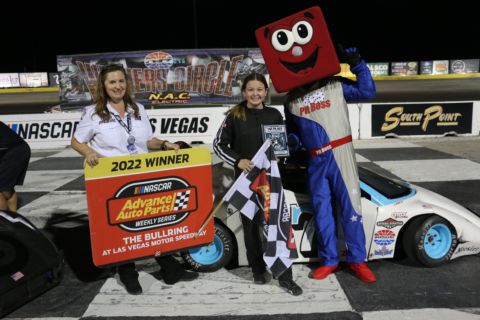 The annual “Throwback Night” at the Bullring at the Las Vegas Motor Speedway Saturday saw many of the track’s winningest drivers back in victory lane at the fast 3/8-mile paved oval in Round 9 of the Star Nursery Championship Series. But it also witnessed impressive grade school racers showing their mettle in the “full moon” evening action.

The penultimate round of the 2022 Star Nursery Championship proved to secure several division point championships, but the racing was once again outstanding with wheel-to-wheel action throughout the busy (eight classes) competition. The season finale is this Friday (Oct. 14) as part of the ARCA Menards Star Nursery 150 Night.

The favorite throwback machine of the night had to be the car of multi-time Modified track champion Doug Hamm as the popular “Hounddog” brought out the pretty green topless No. 29 machine patterned after his mentor, past champion and track legend Fabian Bray’s favorite race car.

Hamm planned to retire from Bullring action at the conclusion of the 2021 season after driving his strong No. 4X to another NASCAR Power Grade Ind. 602 Modifieds class championship. But with the urging of the wife, Doug returned to competition and immediately found his familiar spot in the Bullring victory lane. Saturday night was different other than his car’s paint scheme and number.

The Las Vegas driver recorded quick time, the six-lap trophy dash and the 25-lap feature in dominating fashion. Hamm took the lead in the main event on laps six from Sam Jacks and never look back to a 3.262-second triumph.

Jacks and 2022 Modified race winner Justin Johnson put on a sensational battle for the runner-up spot before Jacks took a close second at checkered flag over Justin. Fourth went to Jaron Giannini with Brian Williams rounding out the top-five.

“This car is a tribute to the guy who brought me into racing, Fabian Bray,” said Hamm after the event. “Fab was a legend here in Las Vegas Short Track racing and it’s an honor to give his due and thank him for everything he gave me in my racing career. I want to thank my wife and kids for letting me come back and race again in 2022. It’s been a blast.”

When talking about Bullring legends like Hamm and Johnson, you can’t discredit the local race car builder/driver Dustin Ash who has been the driver to beat in the NASCAR Sigma Performance Services Pro Late Model category this year. Ash, currently chasing the all-time Bullring feature wins record with Johnson, left little doubt he was the dominant racer of the division Saturday with two Pro Late Model wins in his potent SPS No. 11 stock car.

After qualifying close to the Bullring track record, Ash came from behind in the 30 -lap race one to score a 1.684-second victory over young Las Vegas competitors Kyle Keller and Amileo Thomson, who moved up from Legends this season. Dustin made a similar charge in 30-lap race two to defeat Keller by 1.055 seconds with veteran driver Scott Gafforini rounding out the podium.

“Tonight, we might have had the best SPS car of the season,” said Ash. “I thought I had a shot at the track record on my second qualifying lap, but just missed. And the car felt good in the first race and even better in the second race. We have worked hard all season to improve all of the SPS cars here at the Bullring. I think that work has played off for myself and our company’s racing clients too.”

While the Bullring veterans were returning to familiar surroundings in victory lane, an 11-year-old from Pleasant Hill, Calif., stole the crowd’s heart with an impressive and dominating showing Saturday.

Cancilla didn’t take the lead in the main until lap 23 when he made an inside move on early leader Caden Cordova and scored the 1.544-second margin over Cameron Carraway and former Bullring Bandoleros champion Ashton Leonard. Fourth went to Cordova with former Legend racer Bryson Brown taking the fifth spot.

“Wow, this is my first time at the Bullring, and I love this place,” said a smiling Cancilla. “I usually race at Madera and Roseville, and we wanted to always race here. I had to wait and see if a yellow flag came and then I would make my move. My car was very fast and really like racing here. I want to tell my dad and family I want to return here soon.”

Another set of youngsters put on a tremendous performance in the MH Building Specialists/JBM Underground USLCI Bandoleros 10-lap feature with four drivers battling to the checkered flag. It was Alexis Bjork hold off Logan Gresser by just 0.155 seconds with third going to Ryan Schank followed by Amelia Suell and Joseph Montoya.

“This is a big surprise for me as we had a lot of problems earlier today,” said Bjork. “I wasn’t even sure if my car could run for the main. But winning feels so good after the earlier trouble.”

In recent events, the action in the MH Building Specialists/JBM Underground USLCI Legend cars has been the fiercest at the Bullring and that trend continued Saturday night with the best side-by-side, bumper-to-bumper racing.

Current Legends point leader Jordan Holloway, the college freshman from Henderson, NV, has been the leading contender for most of the 2022 campaign and he shows his talent Saturday as he prepares for the 2022 USLCI Legends National at the Bullring on Nov. 3-5.

With fastest qualifying honors, Holloway from with eighth on the starting grid and snagged the lead on lap three from Branden Gianinni as he began to pull away from the field. But after a yellow flag on lap 15, fellow Bullring contender Cody Brown applied the pressure on Holloway for four laps. But Jordan managed to pull away for a 2.482-second victory over Gianinni and Northern Californian Ethan Nascimento of Manteca, CA. Brown took fourth with Chris Saykally from Denver, CO, in fifth.

“My car felt good tonight and winning is always fun,” said Holloway. “I’m up in St. George for college classes now but we have been preparing for the upcoming Legends Nationals. I’m anxious for that event but I’m very happy with the win tonight. We have many guys from out of town coming here to check out the Bullring for the November event and the competition is very strong right now.”

The always-wild Skid Plate division had the crowd roaring with some spins, crashes and donuts on all portions of the 3/8-mile paved oval.

Young R.J. Smotherman, the dominant driver in the Skid Plates this year, started more than half a alp behind due to his main event successful and recorded another 10-lap feature win Saturday, but this one wasn’t easy. Front row starter Robert Leany jumped to the point in the first lap and drove brilliantly to a half lap lead but midway in the race.

Unfortunately for Leany, the wild on-track action found several cars spin in front of him on lap seven and he had to take evasive action. Meanwhile, Smotherman continued to close on the leader. On the ninth circuit, Leany spun his machine in turn two while dodging additional cars and Smotherman took over the top spot. At the checkered flag, R.J. won by an 8.923-second margin followed by Leany, Racer X, Jeff Dailey and Don Leonard.

In the 20-lap NASCAR Nostalgia Street Rods Outlaw Factory Stocks, it was total Jacob Quartaro main event with his No. 44 stock car. The Las Vegas racer made a great inside move in turn three on the opening lap and pulled a full straight lead by the tenth lap. The racing was good for second through fifth, but Jacob was the class of the field Saturday with a 4.344-second win over runner-up Kyle Jacks. Third was veteran Pete Meyer, popular Sheri Goldstrom and Rob Pfaffly.

NEXT RACE: Round No. 10 in the Star Nursery Championship Series, the series finale, will be next event at Bullring and is set for this Friday, Oct. 14 at 7:15 p.m. as part of the ARCA Menards Star Nursery 150 Night.  The night’s events will include 150-lap ARCA Menard’s Series West stock car races at 3/8-mile oval along with the NASCAR Power Grade Inc. Modifieds, NASCAR Sigma Performance Series Pro Late Models, Late Model Trucks, USLCI Legends Cars, NASCAR Super Stocks, NASCAR Nostalgia Street Rods Outlaw Factory Stocks, USLCI Bandoleros and the Skid Plate Cars. Gates will open at 4 p.m. with a Pre-Race Concert at The Bullring by The Little Bit Country Band (Star Nursery Stage) at 4:30 p.m. The ARCA Drivers Autograph Session w/ Kurt Busch & Brendan Gaughan (under Bullring grandstand) is scheduled for 5:30. Tickets are $30 for adults. Children 12 and under will be $10. Tickets may be purchased in advance by visiting or calling the LVMS ticket office at 800-644-4444 or online at LVMS.com. For stockyard passes please call 800-644-4444, Monday-Friday, 9 a.m.-5 p.m. PST.