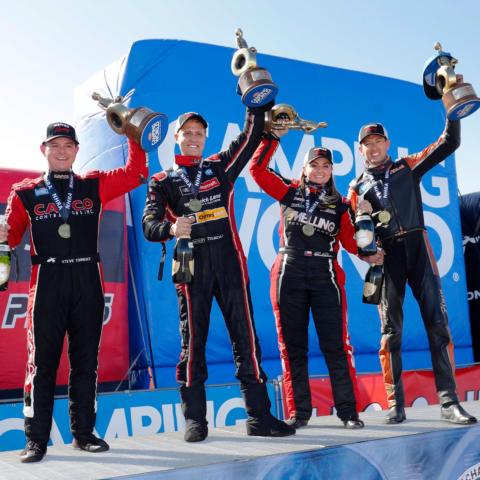 Torrence started race day from the No. 2 qualifier position. He powered his Capco Racing/Torrence Motorsports dragster to his fourth four-wide and 41st Top Fuel win at 3.823 seconds at 321.73 mph over Doug Kalitta (runner up), Clay Millican and Antron Brown.  Torrence was second off the line and had the lead by the time the quad went by the Christmas tree and never trailed from there.

“There’s a lot of cool stuff that happened today. I’m taking my little girl home her first Wally; maybe she’s lucky,” said Torrence. “We had to work hard to get it done today, but we got it done and I’m proud of it.”

Bob Tasca III celebrated his first Funny Car win in nearly two years and seventh total with a run of 3.938 at 328.46 in his Ford Motorcraft/Quick Lane Mustang. This marked his first four-wide win as he was runner-up at the Charlotte four-wide in 2011. Tasca III outran Matt Hagan (runner up), Tim Wilkerson and Ron Capps.

Defending NHRA Pro Stock World Champion Erica Enders took home her 30th career win and seventh at The Strip at Las Vegas Motor Speedway with a 6.656 at 205.88  in her Elite Motorsports Chevrolet Camaro, outpacing Friday top qualifier Aarron Stanfield (runner up), Deric Kramer and Mason McGaha. Enders is the first to win a four-wide race from the bottom half of the field and has won her last six final-round appearances.

“I’m so thankful for this,” said Enders, “I really want to give a big thank you to my guys. They got down to business today and that’s all that matters. I’m so proud of my team, and I friggin’ love Las Vegas.”

In Pro Stock Motorcycle, Ryan Oehler won his second ever title outpacing Cory Reed (runner up), Steve Johnson and Scotty Pollacheck. Oehler Flyin' Ryan Racing/B&K Cylinder Heads bike was first off the line and finished with a run of 6.911 at 194.83 about 17 feet ahead of Reed for his first four-wide win.

“Everybody that’s helping me out, that you so much, this is awesome; we got our second Wally baby and there’s going to be more,” said an elated Oehler.

Fans can also renew their DENSO Spark Plugs NHRA Four-Wide Nationals tickets and RV spaces as well as annual packages including both NHRA weekends (April and October) at https://www.lvms.com/or by calling 800-644-4444. Follow on social media @LVMotorSpeedway.