Xfinity Series returns to LVMS twice in 2022; Trucks to be part of March tripleheader weekend again 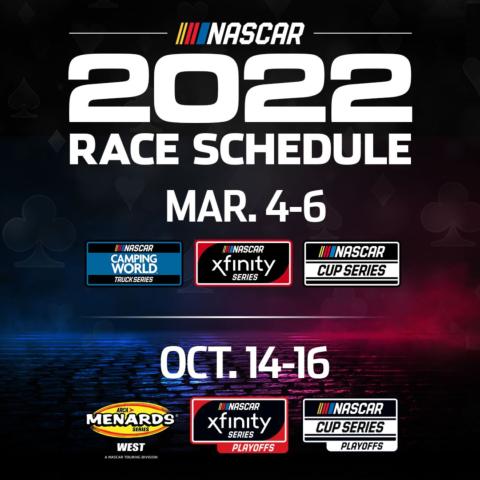 For the fifth consecutive year, the NASCAR Xfinity Series will make two stops at Las Vegas Motor Speedway in 2022, while the NASCAR Camping World Truck Series again will kick off a tripleheader of racing action in March.

“The Xfinity Series has put on some of the best racing at Las Vegas Motor Speedway,” said LVMS President Chris Powell. “We also are thrilled to have the fall race weekend moved three weeks later into October, which will create a much more comfortable climate for the fall playoff events.”

As a result of the shifting of fall dates, a television window is not available that weekend to host the truck series, so that event will move to Sonoma Raceway in June.

“Our loss is Sonoma’s gain, and we’re happy that fans in the wine country will get their first taste of Camping World Truck Series racing in 24 years,”  Powell said. “And we know the March truck race will be the beginning of a great weekend of racing, and we’ll have more information in the coming weeks about more events for the October weekend.”

The fall race weekend also will include an ARCA Menards Series West race at the Bullring on Friday night. Race times as well as practice and qualifying schedules will be announced at a later date.

Tickets for both LVMS race weekends are available on the speedway’s LVMS.com.