B. Torrence, Capps, Anderson and Krawiec Clinch No. 1 Qualifiers at Dodge NHRA Finals presented by Pennzoil 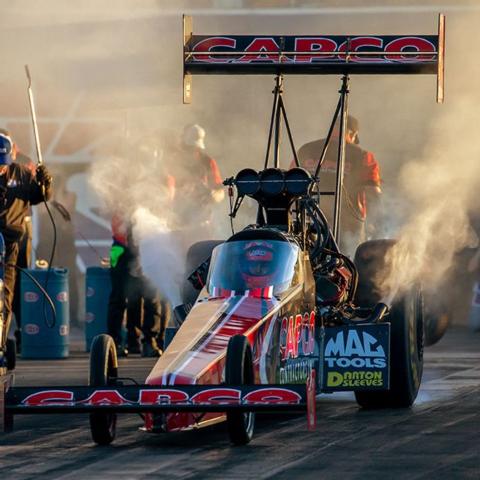 Billy Torrence knocked son Steve off the number one spot with a run of 3.728 seconds at 325.30 miles per hour in the final round of Top Fuel qualifying in his Capco Racing/Torrence Motorsports Dragster. The younger Torrence, who is in the top position in Top Fuel points and is the two-time defending champion, holds a commanding lead closing in on a third straight world title.

“I knew that one of those last two cars right there could definitely pick us off,” said Torrence. “I saw Leah (Pruett) go up in smoke but my old man had a good run. We need to go rounds tomorrow and not worry about the points.”

“We know so many families out here that this has become a home track for us,” said Capps. “To get my first Camping World hat, it’s a number one qualifier not a win hat yet, but I wanted one before the end of the year for our team. Great job to everyone.”

Four cars went home in the 20-car Pro Stock qualifying field as the top-16 advance to tomorrow’s championship eliminations. Greg Anderson piloted his Summit Racing Equipment Chevrolet Camaro to the number one spot in the field holding off Jason Line in the second round of qualifying with a 6.602 second run at 206.73 mph. Defending event winner and Pro Stock World Champion Erica Enders is seeking her fourth NHRA Pro Stock world title and will start in 12th position.

Pro Stock Motorcycle rider Eddie Krawiec held on to the top spot in the class after setting a track record with a 6.818-second pass (198.12 mph) in the first round of qualifying aboard his Screamin' Eagle Vance & Hines Harley-Davidson. Current points leader Matt Smith will start in the second position.

Taking home the NHRA Rookie of the Year Award on Saturday was Top Fuel racer Justin Ashley. The 25-year-old from Plainview, N.Y., raced his Strutmasters.com Top Fuel dragster powered by Manscaped to one victory, qualified for every national event during the 11-race season, led the category in reaction time advantage and secured 10 round wins.

“There’s been so many high points this season,”” said Ashley upon receiving the trophy. “I’m fortunate to receive this award, but it’s not an individual award, this a team award. In a crazy year, NHRA’s been tall and they are really doing an awesome job. I’m just really excited and I’m definitely going to cherish this moment.”

The sold-out event marks the last of 11 races during the 2020 NHRA Camping World Drag Racing Series and the first major professional sports event to be conducted in Nevada with spectators in attendance since mass gatherings were suspended at the onset of the Covid-19 pandemic in March.