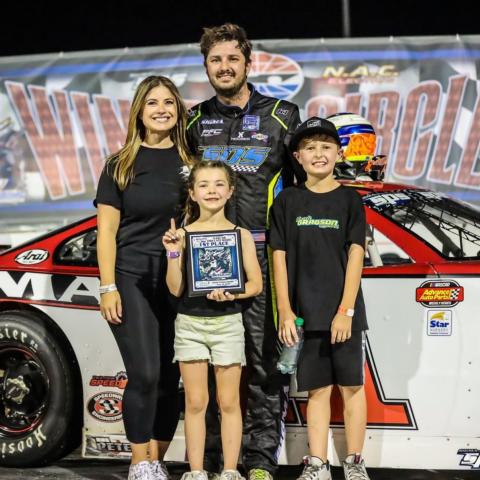 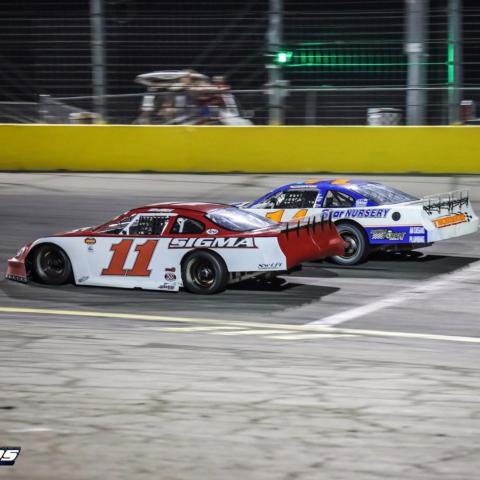 The Ash family knows how to celebrate “Fathers’ Day” a week early after a stellar performance Saturday night in the “Chris Trickle Classic” Night, the sixth round of the Star Nursery Championship, at the fast Bullring at Las Vegas Motor Speedway.

Dustin Ash, one of the Bullring’s all-time winningest drivers, and his son, Tanner, posted impressive victories at the quick 3/8-mile paved oval despite blistering temperatures at 110 degrees and 30 mile per hour winds.

The night opened with an emotional speech from Chuck Trickle, Chris’ father, as the event honored the life of the promising young racer who was tragically killed in a street drive-by shooting incident in 1997. Chris passed away in 1998.

Ash, the race car chassis builder for Sigma Performance Service in Las Vegas, proved to be the class of the NASCAR SPS Pro Late Model division in qualifying with a fast time of 15.595 seconds to place the driver of the No. 11 SPS stock car on the pole for the night’s first 30-lap main event.

But at the drop of the green flag, it was teenager Kyle Keller taking the top spot with a great outside move and Keller and Ash raced side-by-side for the lead for several circuits. But the veteran Ash kept the pressure on Keller, driving the No. 12 LVMPD machine, in a nose-to-tail battle.

On lap 19, Ash dove inside of Keller for the advantage and didn’t look back with a 1.189-second triumph over the youngster with another young driver, Jonathan Mawhinney, rounding out the top-three podium. Bullring veterans Chris Clyne and Scott Gafforini completed the top-five with 15-year-old female, Kylie Ith of Salt Lake City, UT, placing sixth.

The next feature of the evening saw the popular USLCI M&H Building Specialists/JBM Underground Bandoleros in action with Tanner Ash, after setting quick time, starting on the pole in his No. 11 car. At the start, it was Tanner to the lead, and he never looked back with an impressive 3.080-second win. It was his first Bandolero win of 2022 and Tanner’s grandfather, Ken, was happy “grandpa” in victory lane with his camera in a rapid photo session.

“This was an exciting night for the Ash family with my wins and Tanner’s win in the Bandoleros,” said Dustin Ash after the evening’s events. “I know my dad was very excited. The No. 11 car was good on long runs and I’m a proud dad with Tanner’s win. It’s an early Fathers’ Day present for my dad and I.”

In the SPS Pro Late Models 30-lap finale at the end of the night, Ash had to come from eighth starting position with the inverted starting field to chase down earlier leader Clyne and his No. 14 Star Nursery stock car. Clyne took the lead on lap five from Johnny Spilotro and jumped to large margin before Ash began his charge.

It took Dustin some 15 laps to catch Clyne and they had the crowd on its feet by lap 24 with fantastic side-by-side action. Finally, Ash was able to slide inside of Clyne for the front spot and took the checkered flag by 1.124 seconds for his second feature win of the night.

Clyne, a many-time feature winner at the Bullring, had to settle for runner-up with Keller placing third followed by Gafforini, David Anderson, Spilotro and Ith.

The NASCAR Nostalgia Street Roads Outlaw Factory Stocks main event saw some of the best bumper-to-bumper racing of the “Chris Trickle Classic” Saturday with Kyle Jacks holding off Sheri Goldstrom and Jacob Quartaro at the checkered flag. After a lap 13 yellow flag, Jacks and Goldstrom raced nose-to-tail in a spirited fight for the lead. Quartaro got in the mix in the final five laps before Jacks took the 0.666-second win over Sheri and Jacob. Defending series champion Michael Miller and teammate Pete Meyer rounded out the top five in the 30-lapper.

“It was pretty toasty in the car tonight,” said Jacks. “I had some great competition from Sheri and Jacob tonight. I had some motivation to come back strong after that hard hit in the Modifieds last month. I was stiff for a few days, but I want to have a strong showing tonight after that incident. It feels good to win tonight.”

“We have had a couple of trying years working with new stuff on our Modified cars, so it’s fun to come back to our roots in these cars and they are a lot of fun,” said Sam Jacks. “The car was a little loose at the end, but I would have rather raced Justin for the win. I hope his car is too bad after that misfortune.”

It was an exciting duel in 30-lap NASCAR Power Grade Inc 602 Modified feature between many-time track champion Doug Hamm of North Las Vegas and his rival Johnson. Hamm and Johnson started side-by-side on the front row and kept that distance throughout the entire 30 laps before Hamm’s No. 4 machine took the win by 0.415 seconds over Johnson’s popular No. 17 followed by fast qualifier Sean Hingorani, Kayli Barker and Brian Williams.

“Justin is one of the best drivers out here along with Ash,” said Hamm. “My wife said go back and race tonight. I missed the kids’ dance recital, but we got the win. I was supposed to take this year off, but I think the wife gets tired of me around the house. She kicks me out and I get to go play. I think this is our third race this year and it’s nice to win.”

The highly competitive USLCI M&H Building Specialists/JBM Underground Legend Cars division saw some wild on-track action Saturday before also several caution periods including a scary red flag situation when recent high school graduate Chloe Lynch flew upside down and slid into the turn one wall. Lynch, showing more potential in recent events for a fourth last month, saw her car flip on its roof with the stellar LVMS safety team removing her from the damaged machine. After a medical checkup at the track, Lynch was released, passing all tests.

In the always entertaining Skid Plate car action, race favorite R.J. Smotherman, winner of numerous 2022 features, had to start a half-lap behind his competitors at the drop of the green flag. But that disadvantage didn’t hinder the Pahrump, NV, teenager’s charge to the front. Marine Sergeant Jeff Dailey made a great start by holding the front spot for the first five circuits before Smotherman took over the lead and never looked back.

NEXT RACE: The annual “NIGHT OF FIRE” (Round No. 7 in the Star Nursery Championship Series) is the most popular Bullring event of the year and will be next event at Bullring presented by Star Nursery set for Sunday night, July 3, at 7 p.m. A huge Fireworks display will follow the racing competition at 3/8-mile oval which includes the fast NASCAR Power Grade Inc. Modifieds, NASCAR Sigma Performance Series Pro Late Models, Late Model Trucks, USLCI Legends Cars, NASCAR Super Stocks, NASCAR Nostalgia Street Rods Outlaw Factory Stocks, USLCI Bandoleros and the Skid Plate Cars. Gates will open at 5 p.m. with opening ceremonies taking place at 6:45 p.m. Tickets are $15 for adults. Children 12 and under will be admitted free with a ticketed adult through the 2022 Bullring season. Tickets may be purchased in advance by visiting or calling the LVMS ticket office at 800-644-4444 or online at LVMS.com. For stockyard passes please call 800-644-4444, Monday-Friday, 9 a.m.-5 p.m. PST.