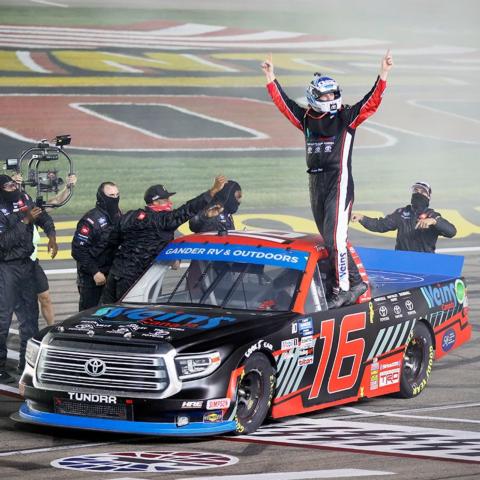 Racing in September in Las Vegas seems to agree with Austin Hill.

The 26-year old Georgia native toiled outside the top 10 for the first two stages, but made a bold move on a restart with 40 laps to go and held off the night’s most dominant driver, Sheldon Creed, for his second straight win in the World of Westgate 200 NASCAR Gander RV & Outdoors Truck Series race Friday night.

“I told the guys after Bristol we’re gonna go to Vegas and win it,” said a jubilant Hill in Victory Lane. “We didn’t have the best truck and we fought adversity in the first two stages. But on that last restart, I knew I had to get through the gears right and figured if we could get the lead we could hold everyone off – except maybe for Sheldon.”

Creed, the 22-year old driver for Las Vegan Maury Gallagher’s GMS Racing Team, dominated the race’s first two stages. But following a caution for Jordan Anderson’s stalled truck, Creed got a very poor restart allowing Hill to seize the lead. Creed dropped from first to eighth on the restart and could not make up the final spot.

“The 18 (Christian Eckes) took us three-wide on that restart and we lost a lot of spots,” Creed said. “But we’re all racing hard for a championship. Once I got caught up to (Hill), he did a great job of blocking my air. But I had hope still, I don’t give up until the end. I knew if I got next to him I’d have a good shot. Tonight, I was almost perfect at times, then at others, I’d get kind of loose. We just need to keep working hard.”

Over the final 10 laps, Hill ran right against the outside wall as Creed tried high and low to make the pass but to no avail.

“I knew he was better than us and I had to protect,” Hill said. “That’s the first time I’ve ever ridden right up against the wall here. It was a little intimidating at first, but after a few laps I got pretty comfortable.”

The win solidifies Hill’s spot in the next round of the playoffs as the series moves to an elimination race next weekend in Talladega.

Next up is Saturday’s Xfinity Series playoff opener, the Alsco 300, featuring series standouts Chase Briscoe and Austin Cindric as well as local favorites Noah Gragson and Riley Herbst. The race is set for a 4:30 p.m. Pacific Time start and will be live on NBCSN.