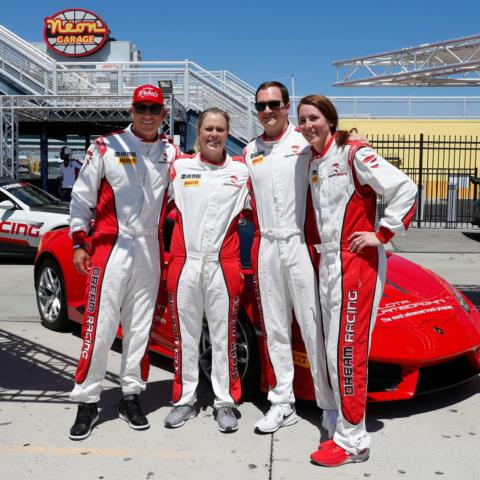 Tuesday was a day for the coaches to be coached as instructors from Dream Racing put several UNLV Rebels coaches through a crash course on driving high-powered Lamborghinis.

Four UNLV head coaches visited Las Vegas Motor Speedway and burned up the asphalt at speeds of more than 150 miles per hour as part of the annual Rebel Caravan. This third annual event was making its first ever visit to LVMS.

“This is an awesome way to start the morning,” said second-year UNLV head football coach Marcus Arroyo. “Anytime you start your morning like this it gets you fired up. It was a different type of adrenaline than what you get at a football game. I am probably more accustom to a football game so this was different. It’s great to be out in public and get out in Vegas. I had low expectations for me to understand what was going on besides being coachable. I think that’s the biggest thing is being coachable. This was phenomenal.”

“I would throw in the joke about if basketball doesn’t work out, but I don’t know if that’s the case here,” Kruger said. “I am shaking a little bit; that was a lot of fun. I have no idea how fast I went. I was paralyzed, eyes forward, and worried about where I was going.”

La Rocque was the first to hit the track and she set the pace as her fellow coaches watched with shock at the speed she hit on the very first lap.

“This was exhausting but being out on the track was so fun,” said La Rocque, who was named Mountain West Conference Coach of the Year in her first season. “Getting to drive fast was definitely an adrenaline rush.”

La Rocque’s father Al taught both NASCAR stars Kurt and Kyle Busch at Durango High School and they have been family friends for many years.

Sullivan said it was a different experience being coached on how to drive.

“It was incredible; it was a thrill,” Sullivan said. “I had some great coaching going on. I loved it. I do like to go fast but never this fast.”