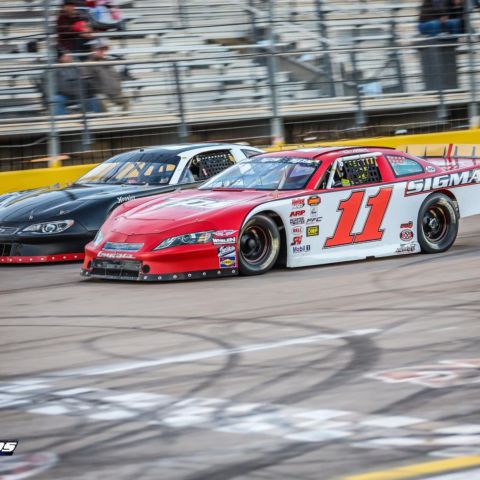 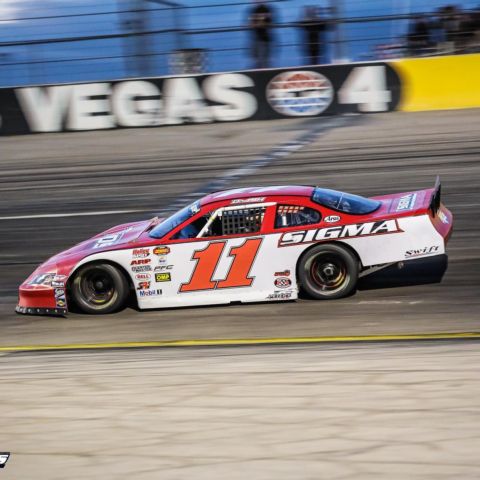 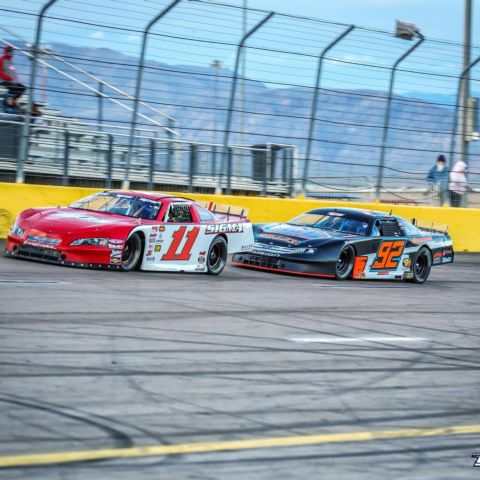 If veteran driver Dustin Ash hadn’t proven he is the “King of the Bullring” this year in the Late Model divisions, the Las Vegas racer definitely showed it last Saturday in the annual Star Nursery Classic Open Comp finale event at the 3/8-mile pave oval south of the Las Vegas Motor Speedway.

The Las Vegas racer left little doubt that he was the driver to beat after Friday’s qualifying runs as he captured the pole positions in both categories with clockings of 14.341 seconds in the Super Late Models and 15.440 seconds in the Pro Late Models. Ash’ Super Late Model timing was a new Bullring track record, besting Derek Thorn’s 2017 mark of 14.489. Ash had set the Pro Late Model qualifying record earlier this year at 15.378.

In the 100-lap Super Late Model final, Ash, starting from the pole, took the lead at the drop of the green flag and battled young Donny St. Ours in a team SPS machine for the first 50 laps. But, after the competition yellow period at the halfway point, Dustin was able to pull out an advantage over St. Ours and teenager Sean Hingorani. Veteran Jeff Peterson, a late entry with his No. 0 stock car, drove a consisent race and jumped to second after Hingorani and St. Ours had issues with their machines late in the contest. Ash led all 100 laps in the Super Late Model main event.

At the checkered flag, it was Ash by 2.679 seconds over Peterson with first-time Bullring competitor Austin Thom of Dundee, OR, rounding out the top-3 podium. Fourth went to Jimmy Parker Jr. with former Bullring series champion Chris Clyne fifth. Placing sixth through tenth was Kasey Kleyn, Dennis Rock Jr., Scott Sanchez, Zach Riehl and St. Ours.

Ash had to battle his way to the front in the 100-lap Pro Late Model feature when young Dylan Zampa of Napa, CA, who set the Bullring track record last year in the Star Nursery Classic, jumped to the lead immediately in his No. 92 machine. Ash hounded Zampa for the first 26 laps with nose-to-tail action that excited the Bullring crowd. But Dustin made the inside move in turn one on lap 27. Zampa wasn’t about to let Ash get away as he pressured the Las Vegas driver until the 50-lap competition yellow segment. Ash admitted his crew found a change that made the No. 11 car much better in the final 50 circuits Saturday. Dustin was able to extend his margin in traffic as Zampa made several attempts to get with a car length late in the race. But it was to no avail and Ash scored his second 100-lap victory of the day.

At the 100-lap Pro Late Model finish, it was Ash by 2.426 seconds over Zampa, the Alan Kuwicki Development driver, followed by another young driver, Kyle Keller of Las Vegas, with Peterson in fourth and Hingorani in fifth. Cody Kiemele posted sixth followed by Ethan Nascimento, Amileo Thomson, John Holtger and Ronnie Kennealy.

“Wow, it was quite day for the SPS team and I’m very excited to win both features,” said Ash. “In the Super Late Models, I think Donny (St. Ours) pressured me a little more than I wanted in the first 50 laps of the race. He was fast and had to run very hard. The young guys were quick in that race, but our car was really hooked up. It’s nice to come back to the Bullring with the Super Late Model after running Pro Late Model here during the season. These cars have a bigger motor and wider tires. So, you are driving faster.

In the Pro Late Model race, Zampa jumped out quickly at the start and I need to stay close with him. His pace was good, and our car wasn’t as good as we needed. I dove inside in turn one to grab the lead, but we needed to improve the setup. Luckily, my guys on the SPS crew figured out a small change that really helped and I was able to extend the lead later in the race.”

As usual a strong Northwest contingent hit the Bullring in the Star Nursery Classic for the two Modified divisions, and they didn’t disappoint with two Idaho racers dominating the competition.

In the always wild and lightning fast Super Modifieds, veteran Bryan Warf of Kuda, ID, became the fastest driver ever around the Bullring paved oval when he posted a new track record of 12.282 seconds on Friday afternoon. That clocking beat the 12-year-old mark of Lonnie Adamson’s 12.426 set in 2010.

In the 35-lap feature, Warf started eighth in the No. 91 Super Modified and quickly diced his way through the field, grabbing the lead on lap seven. Warf dodged his way in and out of traffic to easily post a 4.945-second win over fellow Idaho racer Stacy Jensen, whose normal job in competing on the Monster Truck series. Third went to veteran Randy Whitman followed by Brian Otts and Richie Castor Jr.

“We have missed coming to the Bullring with our Super Modifieds,” said Warf. “It was back in 2010 when we were last here, and this is an awesome track for our cars. I love this place. Hopefully, we can return here in the near future. Thanks to the fans to watching us compete here. It’s fun to be here.”

In the 75-lap Star Nursery Classic Modified main event, Idaho’s Shelby Stroebel held off some challenges from Jaron Giannini and Scott Winters early in the race and led all 75 circuits in his No. 24S machine. After winning the pole position Friday, Stroebel drove his way through some heavy traffic holding off Winters by just 0.739 seconds at the checkered flag. Third went to Las Vegas’ Sam Jacks followed by Nathan gasser, Josh Fanopoulos, Jeff Longman and Kyle Jacks.

“It feels so good to finally win here,” said Stroebel. “I have been close before, but this is my first feature win at the Bullring. Scott is always tough here and I knew he was right there on my rear bumper. This is a fun place to race. I always look forward to coming to the Bullring.”

Hingorani, the 15-year-old racer from Newport Coast, CA, proved to be the class of the field Saturday in the 65-lap Junior Late Model event in his No. 21stock car. On Friday, Sean set a new class track record with a 15.667-second reading, easily besting the 2017 mark of 15.870 by Jesse Love.

Then, Hingorani, who also competed in the Super Late Models and Pro Late Models Saturday at the Bullring, drove away from the Junior Late Model field and took a 10.863-second victory over former Bullring Bandoleros champion Ashton Leonard, Joey Kennealy, Bryson Brown and Danica Dart.

“Wow, this car was on rails today,” said Hingorani, a promising Late Model racer coming from the Legend cars. “I like this track a lot and it’s fun to race here. I have been racing all over the West Coast this year, but I always get excited to come back to the Bullring. It was a busy day for me with the three classes but I’m learning a lot with three types of race cars. I’m anxious to return here next year.”

NEXT RACE: The 2023 Bullring at Las Vegas Motor Speedway presented by Star Nursery race schedule will be announced in the near future with another 10-race Bullring Series plus the ARC Star Nursery 150 and the Star Nursery Classic. For more information, please contact the LVMS ticket office at 800-644-4444 or online at LVMS.com. For stockyard passes, please call 800-644-4444, Monday-Friday, 9 a.m.-5 p.m. PST.