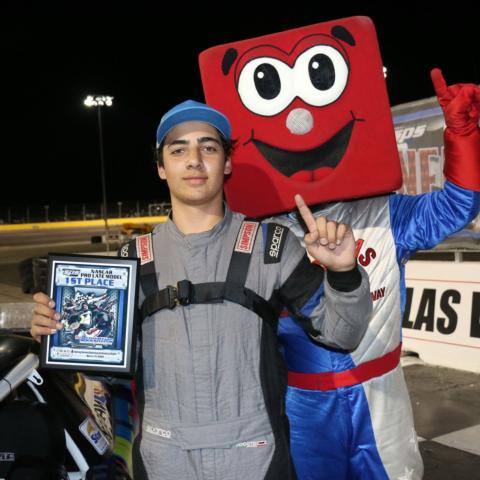 Now in its 38th season at the fast oval north of the famous Las Vegas Strip, the track continues to produce outstanding racing with growth of young drivers proving their talents against veterans of decades at the Bullring. This time, teenagers Sean Hingorani, Jordan Holloway and Kylie Ith celebrated main event victories in their respective classes with the Bullring regulars and past champions Doug Hamm, Justin Johnson and Michael Miller making their usual trips to victory lane.

Hingorani, the Newport Coast, CA, teenager, scored his second NASCAR Sigma Performance Services Pro Late Model feature win of the early 2022 campaign with a 1.209-second victory over 15-year-old Kylie Ith in the 60-lap main event but the win wasn’t easy. In fact, it took an incident with leaders Chris Clyne and Scott Gafforini in turn two on lap 47 which produced a tire puncture for early leader and pole winner Clyne.

On the restart, Hingorini, the Pro Late Models season-opening winner, jumped to the top spot and held off a charging Ith to the finish line in his No. 13 SPS stock car. Third went to Alex Eskandari, the local car salesman with Prestige Dodge/Chrysler/Jeep in Centennial, NV, followed by Kyle Jacks, Gafforini, David Anderson and Steve Anderson.

“That was an exciting race tonight,” said Hingorini, who began his Bullring career last year in a Legends car. “There was some contact in the field early in the race and I had to stay patient and continue to hit my marks. I want to thank Sigma Performance Services for giving me the best car out here. It was a strong car again tonight.”

Holloway, the 16-year-old from Henderson, NV, has been close to moving to the top of the winner’s podium on Saturdays many times and took that top step this time in a wild and exciting 25-lap USLCI M&H Building Specialists/JBM Underground Legends feature. Jordon won Friday’s 20-lap preliminary Legends event.

The former quarter-midget racer driving his No. 12 machine started second in the large 28-car field Saturday and battled polesitter T.J. Roberts and early leader Enzo Lalama for the lead in the first seven circuits before securing the top position. But despite holding the lead, Jordan could never shake loose of his challengers in a dramatic bumper-to-bumper battle with Lalama, Friday’s Young Lions Legends winner Cody Brown, Roberts and young female star Kenna Mitchell of Loomis, CA.

In addition, there was drama early for Holloway as his car was shooting sparks from the rear as the exhaust was hitting the track pavement. During a red flag period on lap 11, the Bullring Safety Team helped relieve Holloway’s car of the problem and he was safe to return to action in the lead.

But sensational side-by-side racing with the top three had the crowd on their feet and Holloway held off his contenders with a 0.202-second win over Lalama, Brown, Roberts, Mitchell, Gavin Ray, Ricky Gutierrez and Chloe Lynch.

“That was a wild race with Enzo and Cody tonight,” said Holloway. “My exhaust was loose in the beginning of the race and then about halfway I lost the exhaust. But it didn’t hurt the car’s performance. It’s great to win on Saturday after taking the Friday prelim race.”

Ith, the 15-year-old female from Salt Lake City, UT, had a busy night with her No. 19K Late Model car, with a second in the Pro Late Model feature and a dominating showing in the 25-lap Junior Late Model main over youngsters Caden Cordova, Harley Kennealy and Cameron Carraway.

“This is exciting since it’s my first win at the Bullring,” said Ith. “I race all over the West Coast and I really like racing at the Bullring. I compete at Roseville, CA, Madera, CA, Tucson, AZ, and in Idaho. I look forward to racing here in the future.”

For veterans Hamm, the eight-time Bullring Modified champion, and Johnson, a 50-plus Bullring feature winner, they put a dazzling display in the opening 25-lap NASCAR Power Grand Inc. 602 Modified main event with nose-to-tail action lap after lap. Johnson jumped out to the lead from the drop of the green flag, but Hamm wasn’t about to let him open a gap. Doug’s famed No. 4X had his front bumper on Johnson’s No. 17 rear bumper for the first 17 laps as they pulled away from the rest of the Modified field.

Finally, on lap 18, Hamm made the inside move in turn three and claimed a familiar spot for the Las Vegas racer with the lead. But Justin pressured Doug to the checkered flag. Kayli Barker took third followed by Court Connell and Brian Williams.

In the 30-lap finale, Johnson came from sixth to take the lead by lap 3 and never looked back with a 5.872-second win over Hamm with Barker, Connell, Brian Williams, Warren Knipper and Ben Williams.

“That JJ is one heck of a driver,” said Hamm. “That was some great racing. He gives you room to racing and I got a break with some lapped traffic. Thanks to all of the fans for coming out.”

Johnson had great words for Hamm too.

“That old guy is so good and so patient,” said Johnson. “I knew he was there the whole time and waiting for me to leave some room. When I did, he took the advantage. It’s so much fun to race with Doug. In the second race, I was able to open a gap and Doug was caught up with some slower traffic.”

For Miller, a Bullring regular since his childhood, the Outlaw Factory Stocks feature win was extremely special after the passing of his father (Bob) only a few weeks earlier. Michael took his first Bullring track title last year and has been the driver to beat already this season.

In 30-lap NASCAR Nostalgia Street Rods Outlaw Factory Stock main event, Miller moved to second by lap three and vaulted to the lead on lap six in his No. 21 PMR stock car. Miller’s only challenger Saturday night was Kyle Jacks in the No. 4 car who finished 1.561 seconds back at the checkered flag. Third went to Jacob Quartaro followed by Rob Pfaffly, Pete Meyer, Carl Duryee, David Quartaro and Sheri Goldstrom.

“The last two weeks have been very tough on me and my family with the lost of my dad,” said Miller. “I want to dedicate this win to him. I want to thank all of my friends for checking on us and reaching out to us. My dad touched a lot of people, and that reverse victory lap was for him tonight.”

Johnson continues to add to his Bullring feature victory total with nearly 60 wins after his Super Stock 25-lap triumph with his new No. 17 stock car. Justin took a 0.503-second win over Kyle Jacks with Bill Paddock Jr. third. Rounding out the top five were David Quartaro and Bobby Schumacher.

In the always-popular Skid Plate event, it was teenager R.J. Smotherman of Pahrump, NV, scoring another win in his No. 24 machine with 2021 Bullring champion Ben Williams second and North Las Vegas policewoman Berenice Hernandez taking the final podium position in her third career event.

“Wow, the wind really blew the car around in that race,” said Smotherman. “It is so much fun to drive these Skid Plate cars. We hope more people can come and compete with us in the future. They will have a great time.”

NEXT RACE: Round No. 4 in the Star Nursery Championship Series at the Bullring at Las Vegas Motor Speedway will be Saturday night, April 9, with the “First Responders/Hometown Heroes Night” Eight separate divisions will compete at 3/8-mile oval including the fast NASCAR Power Grade Inc. Modifieds, NASCAR Sigma Performance Series Pro Late Models, Junior Late Models, USLCI Legends Cars, NASCAR Super Stocks, NASCAR Outlaw Factory Stocks, USLCI Bandoleros and the fan favorites, Skid Plate Cars. Gates will open at 5 p.m. with opening ceremonies will take place at 6:45 p.m. Tickets are $8 for adults. Children 12 and under will be admitted free with a ticketed adult through the 2022 Bullring season. Tickets may be purchased in advance by visiting or calling the LVMS ticket office at 800-644-4444 or online at LVMS.com. For stockyard passes please call 800-644-4444, Monday-Friday, 9 a.m.-5 p.m. PST. Stockyard pass is $65 and comes with 4 admission tickets. Price may be higher for special nights.