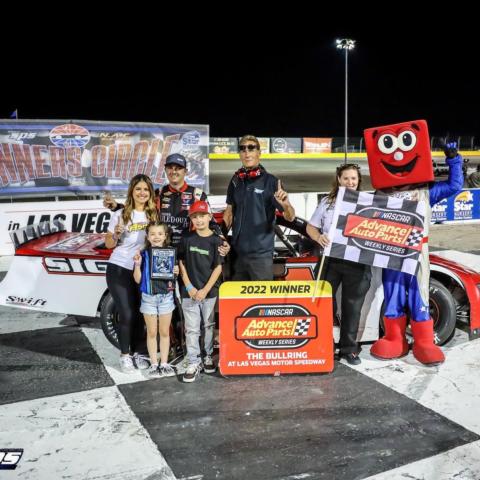 Dustin Ash and Justin Johnson, two of the winningest drivers in the 38-year history of the Bullring at Las Vegas Motor Speedway, added to their impressive main event records with wins last Saturday at the fast 3/8-mile paved oval presented by Star Nursery in front of an enthusiastic crowd in the annual “Military & Veterans Appreciation Night.”

The “Military & Veterans Appreciation Night” honored a large group of veterans on hand in the grandstands as well as the pit area at the Bullring which include a sterling rendition of the National Anthem by recording artist Sahara. Many new drivers competed in the eight-feature program which saw NASCAR’s Weekly Racing Operations manager Kevin Nevalainen in attendance for the first time.

In addition, each car in the pit area carried a name of a “Fallen Hero” in Saturday’s racing program and the winning drivers saluted their “hero” who rode with them during the evening on the public address system after each race.

Ash, the quickest qualifier in the Pro Late Model field, drove his No. 11 Sigma stock car from the pole position in the 60-circuit finale in his 2022 Pro Late Model debut after several main event victories last year. At the drop of the green flag, Dustin battled door-to-door with Smotherman, in the No. 12 Keller Racing machine, and veteran Chris Clyne in the No. 14 Star Nursery vehicle. Clyne moved to second by lap three and pressured Ash for the first half of the feature. The yellow flag flew on lap 42 when past track champion Jimmy Parker Jr. and Matt Frady Jr. tangled in turn two. Again at the green flag, Clyne attempted to close the gap on Ash, but Dustin’s mount was just too strong as he held a several car length advantage.

At the checkered flag, Ash took the win by 1.117 seconds over Clyne with Smotherman rounding out the victory lane podium in a fine drive by the Pahrump teenager. Two more youngsters, John Holtger from Wisconsin and Kylie Ith from Utah, completed the top-five spots with veterans Scott Gafforini, David Anderson and Johnny Spilotro following.

“I can’t thank everyone at Sigma and SPS enough for this win,” said. Ash. “I’m so glad I get to drive this car again. I think this win gets us right up to the most wins at the Bullring. I’m not sure though. We only made some tire pressure adjustments from qualifying to the main event. We actually struggled with the car last night and this afternoon, but we made some good changes. I hope to race more in the Pro Late Models this year, but I’m trying to get my kid (Tanner) a win in the Bandoleros this year too. That is my focus lately. We will try to get this car in victory lane a few more times this year.”

Johnson, doing double duty this year at the Bullring with the popular Al Budd-owned No. 17 in the Modifieds as well as No. 17 in the Super Stocks, took the lead on the second lap of the Modified feature and held off Jaron Giannini in the early stages before taking a 1.998-second win. Kayli Barker placed third with Sam Jacks and Brian Williams rounding out the top-five. Kyle Jacks walked away from a hard hit in turn one when his car’s throttle stuck on the first lap which brought out a red flag.

“I want to thank all of the military and veteran personnel who are in attendance as well as the ‘fallen heroes’ who sacrificed their lives from our country,” said Johnson after his Modified victory. “I knew I had one shot at the 25 (Giannini) and I didn’t want him to stretch his legs and get a run. So, I arced into the turn and got underneath him. The difference between the Modified and the Super Stock is the Modified is like a go-kart and the Super Stock really goes on the straights, but you need to be careful on the brakes on the corners.”

The Super Stock main event win wasn’t an easily one for Johnson as Justin had his hands full with the young Kyle Jacks in the No. 4 machine. Jacks pressured Johnson for the first half of the 30-lapper before Justin was able to open his advantage to 2.382 seconds at the finish. Jacks took the runner-up slot followed by Bobby Schumacher, Bill Paddock Jr and Mike McKearn.

In the 30-lap Legend Cars final, it was two teenagers who put on quite a show Saturday early in the race with Holloway, from Henderson, NV, and Cody Brown of Las Vegas in bumper-to-bumper, wheel-to-wheel action which had the fans on their feet. The yellow flag came out on lap 22 for a turn two spin in the middle of the field. Then Amelio Thomson, TJ Roberts and Ricky Gutierrez became contenders with the drop of the green flag. A slow restart hurt Holloway’s chances as the top-six fought for positions, but another yellow flag flew on lap 24 when Thomson and Brown came together in turn two.

With three laps to go, Gutierrez held the lead with Holloway, Roberts, Chloe Lynch, Bruce Silver and Keller Meechudhone right in the hunt. Finally, with two laps remaining, Jordan took his No. 12 3rd Generation Racing machine to the inside in turn three for the lead. But the contenders were still right there in Holloway’s rearview mirror. At the checkered flag, it was Holloway by 0.396 seconds over Roberts followed by Gutierrez (0.576), Lynch (0.757) and Silver (1.227). Brown came from the back of the pack to take an impressive seventh.

“Wow, that was one of the craziest races I’ve been in with Legends,” said Holloway. “I want to thank the military and veterans here at the Bullring. We just couldn’t take off on restarts tonight. I thought I was running out of fuel on the last few laps. Ricky and I race well together, and I knew I needed to make that move on him in turn three. I look forward to coming back for the next race.”

In the Nostaglia Hot Rods Outlaw Factory Stock doubleheader features, Kyle Jacks had the No. 4 car on a roll with an impressive victory (8.253 seconds) over defending track champion Michael Miller, Dallas Simonette, Rob Pfaffly, Pete Meyer and Sheri Goldstrom in the 25-lap event opener. Miller came back in the night’s 25-lap finale with the 4.155-second triumph over Meyer, Pfaffy, Goldstrom and Simonette.

In the always-popular and wild 15-lap Skid Plate event, Smotherman started in turn three and drove through the field for a 4.326-second win over defending track champion Ben Williams with newcomer Berenice Hernandez placing on the podium with third. Some of the best side-by-side racing of the 2022 Skid Plate season took place in the event as fourth went to Robert Leany and Jeff Bargerhuff. And, as usual, Racer X was disqualified for some usual tactics during the feature event.

NEXT RACE: The annual “Chris Trickle Classic” (Round No. 6 in the Star Nursery Championship Series) is a memorial event for one of Las Vegas’ great young racers taken too soon and will be next event at Bullring presented by Star Nursery set for Saturday night, June 11, at 7 p.m. The popular racing divisions will be back at 3/8-mile oval including the fast NASCAR Power Grade Inc. Modifieds, NASCAR Sigma Performance Series Pro Late Models, Junior Late Models, USLCI Legends Cars, NASCAR Super Stocks, NASCAR Outlaw Factory Stocks, USLCI Bandoleros and the fan favorites, Skid Plate Cars. Gates will open at 5 p.m. with opening ceremonies taking place at 6:45 p.m. Tickets are $8 for adults. Children 12 and under will be admitted free with a ticketed adult through the 2022 Bullring season. Tickets may be purchased in advance by visiting or calling the LVMS ticket office at 800-644-4444 or online at LVMS.com. For stockyard passes please call 800-644-4444, Monday-Friday, 9 a.m.-5 p.m. PST.